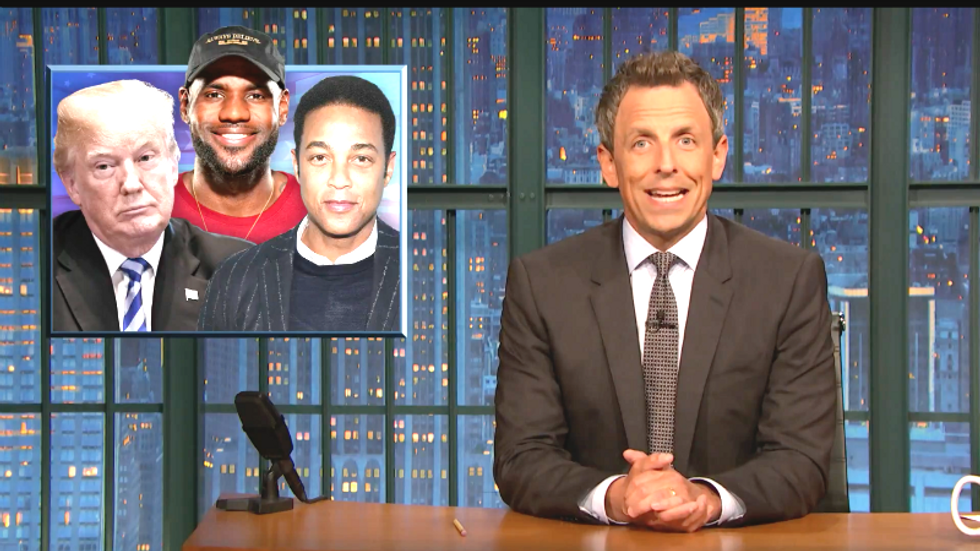 James recently sat down with CNN's Don Lemon to discuss the opening of his I Promise school aimed towards helping at-risk youth in his hometown.

After James said that he would not sit down with Trump, if given the opportunity, President Trump responded by tweeting: "Lebron James was just interviewed by the dumbest man on television, Don Lemon. He made Lebron look smart, which isn't easy to do. I like Mike!"

"Remember Trump says he never watches CNN while simultaneously complaining about what he sees on CNN" Meyers said. "Trump isn't an at-risk youth but LeBron just took him to school."

Meyers said that in order to fuel his ego, Trump surrounded himself by his supporters at his rally in Ohio.

During his Ohio rally, he boasted that he won the women vote.

"That's right, Trump says he won the women -- and we only had to pay off some of them," Meyers said. "Melania's body might be there but her mind is on Amazon prime shopping for LeBron jerseys."

President Trump then went into a rant about space. "What does he think this is happening on Mars?" Meyers asked.

"It's red because they voted for me," Meyers joked as he mocked Trump.