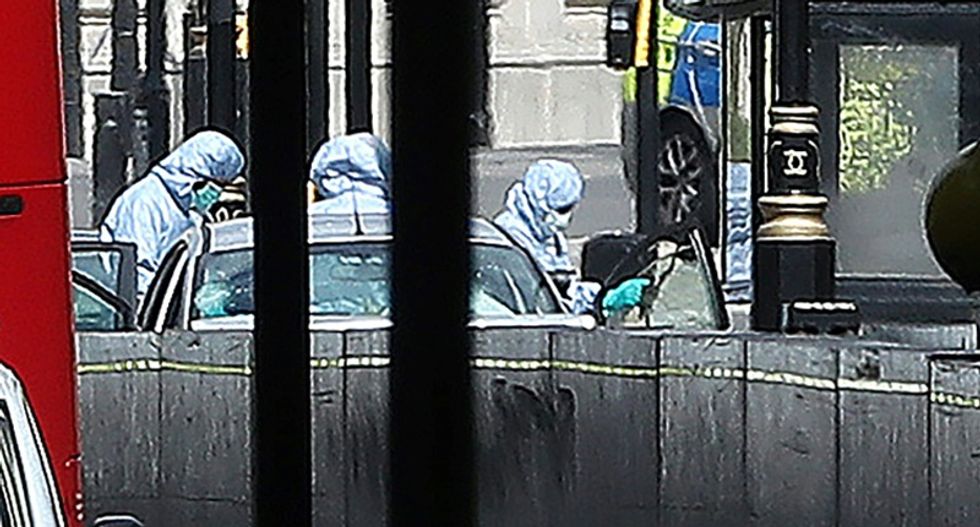 Police forensics officers inspect the car that crashed into a barrier outside Parliament in London. (AFP / Daniel LEAL-OLIVAS)

A car crashed into barriers outside Britain's Houses of Parliament in a suspected terror attack on Tuesday, injuring a "number of pedestrians" close to where five people were killed last year.

Police said they had arrested the driver, a man in his late 20s, and were holding him on suspicion of terrorist offences.

"At this stage, we are treating this as a terrorist incident," said Scotland Yard police headquarters, adding that none of the injuries are believed to be "life-threatening".

Footage shows the silver Ford Fiesta veering across an intersection, hitting a number of cyclists and pedestrians, before speeding into a barrier outside the Houses of Parliament in London at 7:37 am (0637 GMT).

Another recording shows injured cyclists and pedestrians lying in the street in the immediate aftermath of the incident.

Armed officers swooped in to arrest the driver, removing him from the vehicle at gunpoint.

Later images showed police holding the man, dressed in jeans and a black puffer jacket, in handcuffs as roads and Underground stations around parliament were sealed off.

"The driver of the car, a man in his late 20s... was arrested on suspicion of terrorist offences," said police.

"There was nobody else in the vehicle, which remains at the scene and is being searched. No weapons have been recovered at this stage."

Police have yet to identify the suspect, who was not cooperating with detectives, said Metropolitan Police Assistant Commissioner Neil Basu.

The London Ambulance Service said they had treated a man and a woman at the scene and taken them to hospital.

The man was later discharged, while the woman remained in hospital, where she was being treated for serious but non-life-threatening injuries, according to Basu.

Prime Minister Theresa May, currently on holiday in Switzerland, tweeted that her "thoughts are with those injured in the incident in Westminster".

Government officials will hold a meeting of the COBRA emergency committee at 2:00 pm.

"Another terrorist attack in London...These animals are crazy and must be dealt with through toughness and strength!" he wrote.

"I was walking on the other side. I heard some noise and someone screamed," she said.

"I turned around and I saw a silver car driving very fast close to the railings, maybe even on the pavement.

"I think it looked intentional -- the car drove at speed and towards the barriers."

"I saw a car going at high speed towards parliament. It hit a bollard," he told PA.

"It didn't look like an accident. How do you do that by accident? It was a loud bang."

London Mayor Sadiq Khan said "all Londoners, like me, utterly condemn all acts of terrorism on our city.

"The response of Londoners today shows that we will never be cowed, intimidated or divided by any terrorist attack," he said.

Westminster was the scene of a terror attack last year, when Khalid Masood, a 52-year-old British convert to Islam, drove a car at pedestrians on Westminster Bridge over the River Thames, before fatally stabbing a policeman on guard outside parliament.

The attack left five people dead and around 50 injured, and only ended when police shot Masood dead.

Twenty-two people -- including children -- were killed in a bomb attack at Manchester Arena on May 22 and eight people were killed weeks later when a van ploughed into people on London Bridge.

Far-right extremist Darren Osborne killed one man after ramming his van into Muslim worshippers in north London on June 19, while 51 people were injured when Ahmed Hassan, 18, planted an explosive device, that partially exploded on an Underground train.

'We humiliated ourselves': Sweden’s bid to join NATO meets continued resistance from Turkey

May 18, 2022, was a big day for Sweden. After Russia’s invasion of Ukraine and more than 200 years of non-military alignment, the Nordic country finally broke with tradition and applied for NATO membership along with Finland. But what was supposed to be an easy accession has proven to be anything but a smooth sail. NATO member Turkey has a problem with Sweden, and its patience is wearing thin – with both the country’s humor and its freedom of expression principles.

The ink had barely dried on Finland and Sweden’s joint application letter before Turkey started conditioning their aspiring NATO memberships, saying they posed a threat to its national security and they needed to take more concrete steps if they ever wanted its blessing to join the military alliance.