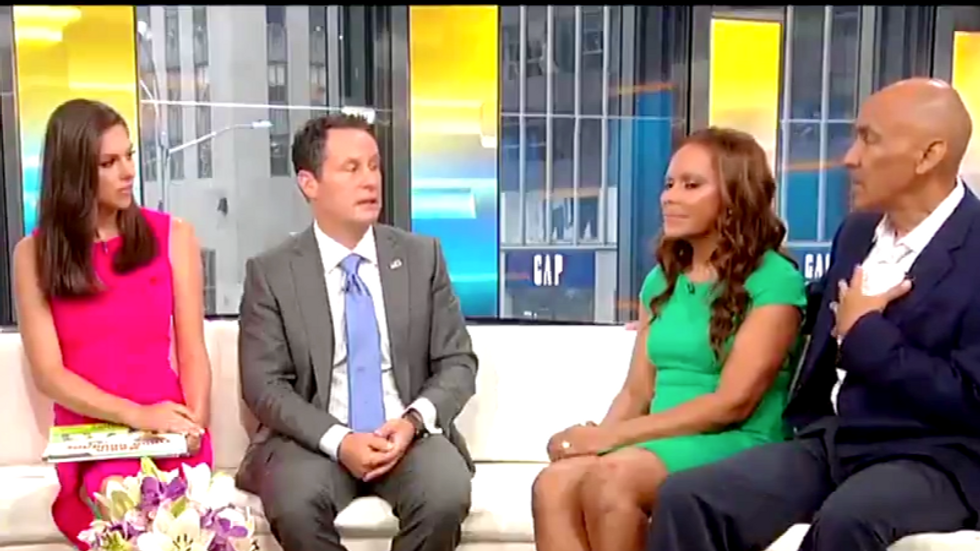 Tony Dungy during an interview on Fox News [Photo: Screengrab from video]

Fox News used NFL legend Tony Dungy as a "prop" to pin black people against each other, according to Robert Littal of Black Sports Online. While doing an interview with Fox and Friends, Dungy was asked if he would kneel during the national anthem.

He answered by saying that he would personally not kneel, but would support players personal decisions. However, the headline that Fox News decided to use did not capture Dungy's full statement.

Littal called out the networks news judgment on Twitter.

"Here is your media lesson of the day. Tony Dungy I'm sure had good intentions and said several things in favor of players, but if you look at the Fox News tag lines they say 'National Anthem Outrage' and their tweet says 'I would stand says, Tony Dungy,'" he tweeted.

Watch Tony Dungy Allow Fox News to Use Him as Prop For Them to Degrade Black Athletes Who Protest Against Racism &… https://t.co/lvUGXLPmup
— Robert Littal BSO (@Robert Littal BSO)1533759269.0

"As I have mentioned several times, if you are a black person in media, Fox News will put you on, not because they want your opinion, but because they can flip your opinion to their MAGA audience. See this nice black gentleman said he'd stand, NFL Players are wrong," he tweeted.

As I have mentioned several times, if you are a black person in media, FOX NEWS will put you on, not because they w… https://t.co/oEh8WSQXcV
— Robert Littal BSO (@Robert Littal BSO)1533759494.0

The Post Game was able to interview Dungy about the twisted headline and asked him to clarify exactly what he meant.

"My headline would be, 'The Dungys support the players’ right to be out-front for social change,'" Dungy said. "We support any way they want to do it, but the idea is to try to make the situation better. I thought that was a very deceptive headline. I would personally stand, but I support those who don’t stand."

"I think it's because I really think I try to represent God's point of view and try to talk about things biblically and I think people appreciate that. I'm not taking one side or another or anti-this. I try to give them good sound advice," he said.