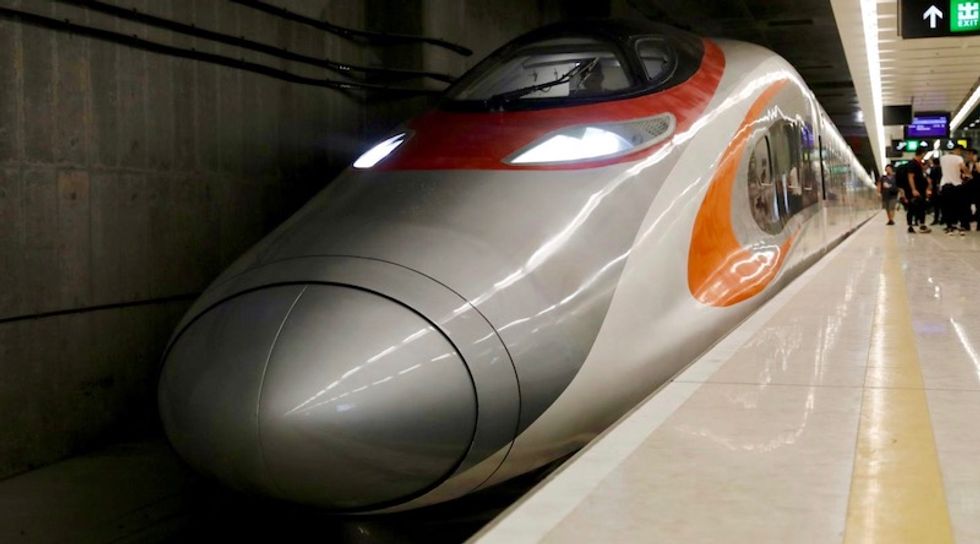 Hong Kong’s controversial bullet train got off to a smooth start on Sunday, as hundreds of passengers whistled north across the border at speeds of up to 200 kph (125 mph), deepening integration of the former British colony with mainland China.

While the $11 billion rail project has raised fears for some over Beijing’s encroachment on the Chinese-ruled city’s cherished freedoms, passengers at the sleek harbourfront station were full of praise for a service that reaches mainland China in less than 20 minutes.

“Out of 10 points, I give it nine,” said 10-year-old Ng Kwan-lap, who was traveling with his parents on the first train leaving for Shenzhen at 7 a.m.

“The train is great. It’s very smooth when it hits speeds of 200 kilometers per hour.”

Mainland Chinese immigration officers are stationed in one part of the modernist station that is subject to Chinese law, an unprecedented move that some critics say further erodes the city’s autonomy.

The project is part of a broader effort by Beijing to fuse the city into a vast hinterland of the Pearl River Delta including nine Chinese cities dubbed the Greater Bay Area.

Beijing wants the Greater Bay Area, home to some 68 million people with a combined GDP of $1.5 trillion, to foster economic integration and better meld people, goods and sectors across the region.

Critics say the railway is a symbol of continuing Chinese assimilation of Hong Kong, which returned to Chinese rule in 1997 with guarantees of widespread autonomy and freedoms not enjoyed on the mainland, including an independent legal system.

But at a ceremony on Saturday ahead of the public opening, Hong Kong leader Carrie Lam praised the so-called “co-location” arrangement with Beijing which the government has said is necessary to streamline immigration.

Scores of excited passengers straddled a yellow strip across black tiles that highlighted the demarcation line between Hong Kong and mainland China, while others passed through turnstiles surrounded by red, orange and white balloons.

“I’m excited to experience the high-speed train, even more excited than when I take a plane,” said a 71-year-old retiree surnamed Leung.

While there have been questions over whether Hong Kong residents would be able to access foreign social media, largely banned in mainland China, in zones subject to Chinese law, some passengers arriving in Shenzhen, on the mainland side, were able to bypass China’s so-called Great Firewall.

The rail link provides direct access to China’s massive 25,000-km national high-speed rail network and authorities on both sides have hailed it as a breakthrough that will bring economic benefits, including increased tourism.

“No matter what you think about the new line, high-speed rail is extremely convenient,” said Feng Yan, assistant professor at the Communication University of China in Beijing who took the bullet train from Shenzhen to Hong Kong.

“Even if it takes some time for people to realize how convenient it is, sooner or later they will.”