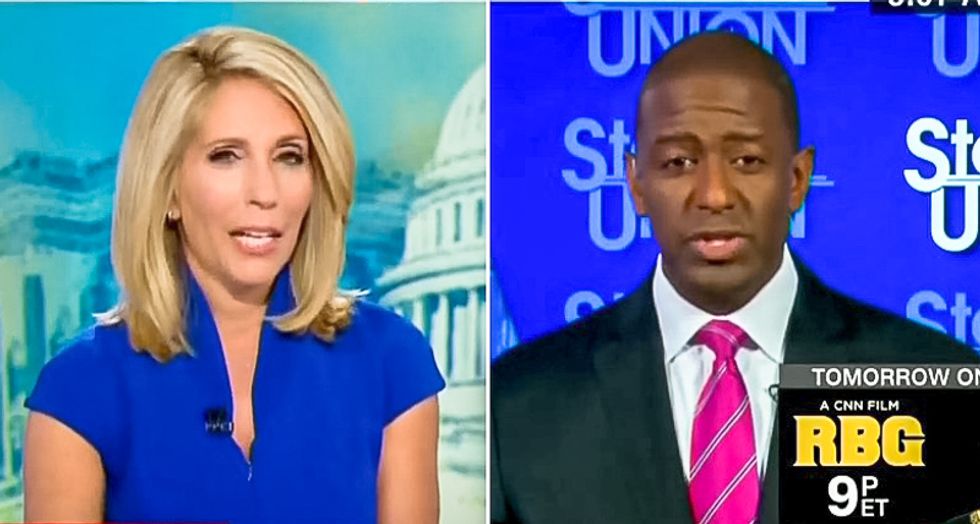 On CNN's State of the Union program, Bash began her interview with Gillum by noting that President Donald Trump had attacked the candidate as a "failed socialist mayor."

"We want access to good and affordable and accessible heath care," Gillum explained, but Bash cut him off.

"And I want to get to a lot of those issues," Bash said before bringing up a racist robocall that targeted Gillum.

Gillum reminded Bash that he was also the target of a racist remark by Republican gubernatorial candidate Ron DeSantis, who seemed to refer to Gillum as a "monkey" in a recent Fox News interview.

"I want to make sure that we don't racialize and, frankly, weaponize race as a part of this process," Gillum said. "Which is why I've called on my opponent to really work to rise above some of these things. People are taking their cues from him, from his campaign and from Donald Trump. And we saw in Charlottesville that that could lead real dangerous outcomes."

Speaking over Gillum again, Bash pointed out that DeSantis, who used the "monkey" slur, had condemned the racist robocall.

According to a Raw Story count, Bash interrupted Gillum during at least eight of his answers. The guest was allowed to finish answering three of Bash's questions without interruption.