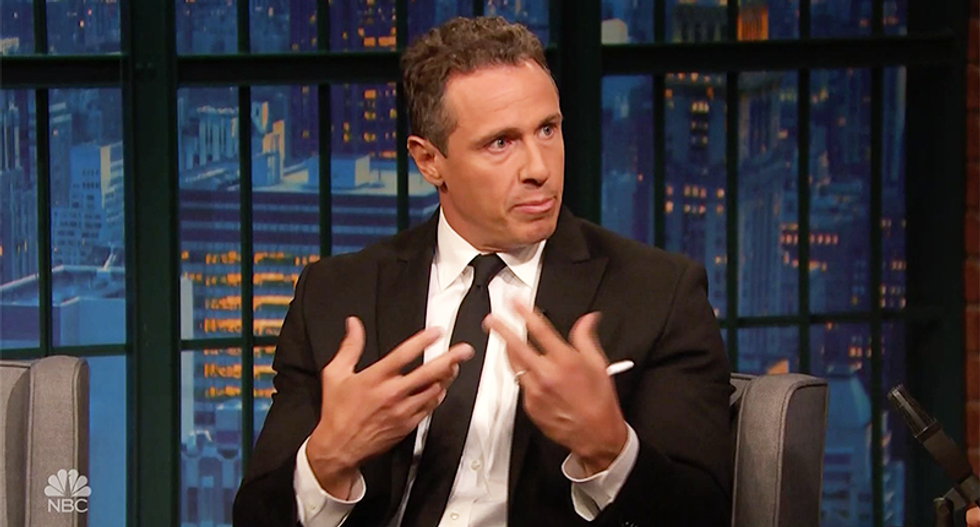 While CNN host Chris Cuomo might be known for his tough questions and demand for accountability for guests on his show, he told Late Night host Seth Meyers he agrees he's part of the problem.

During a Tuesday interview, Cuomo said that he frequently gets berated by liberals for giving a platform to White House apologists and allies of President Donald Trump. However, he said he doesn't want to hear it.

"Look, if I am not doing my job, then don't watch," Cuomo said. "You have great choices on at the same time as me, and if I'm not getting it done, that's the price of performance. But don't be closed off to people just because they say what you don't like. There is value two ways in being tested."

He talked about the silos visible during the hearing for Brett Kavanaugh Tuesday and the disinterest in consensus. When it comes to judges, Cuomo said that the right wants to stack the court with young, white, male judges that will set jurisprudence for an entire generation. For the right, there's nothing else that matters.

"I'm not judging it, but that's why as soon as Kavanaugh, if he makes it through, and he is confirmed, Donald Trump's presidency goes in the history books as being impactful because he will have changed that court," he explained.

The two also joked about an earlier bit Meyers did about Sen. Chuck Grassley (R-IA), who gently tapped his gavel as his Democratic colleagues spoke over him. Meyers found it hilarious because it was so passive aggressive.

"The Grassley thing was so funny, I almost popped one of the caps off my teeth," Cuomo joked.

When the conversation took a serious tone, Cuomo explained that the negativity of the news has a way of consuming someone.

"Look, I wish I had some kind of high ground," Cuomo continued. "Another thing that I constantly get told, including by my kids, is that I'm part of the problem. I get told that all the time, which secretly I have always believed."

Meyers laughed, noting it's always nice when one's children can reinforce their beliefs about themselves.

"I always knew, you know, the self-loathing would pay off with some kind of universal recognition," Cuomo said, laughing. "So, now, that's why I wear all black."