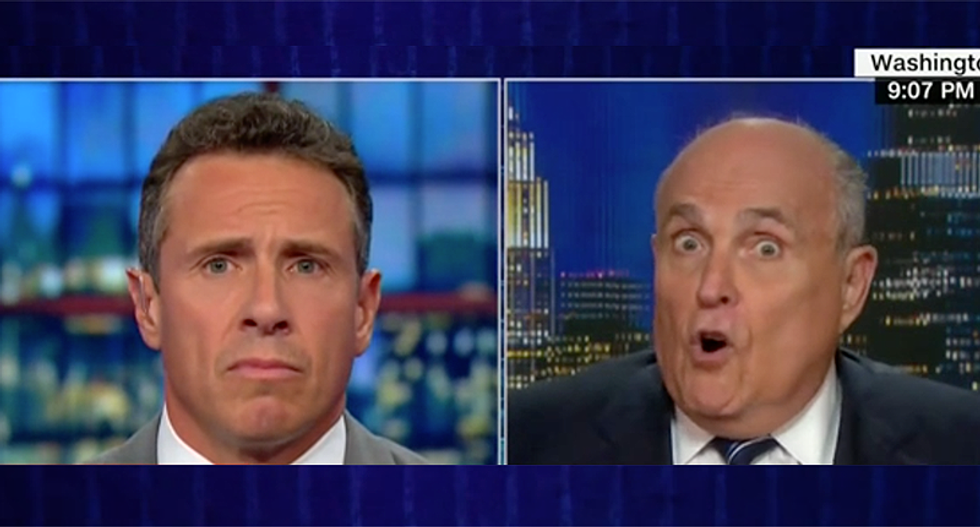 CNN's Chris Cuomo said that the senior White House official that wrote the New York Times op-ed could easily be a hero if he came forward, but it's obvious he doesn't want to be heralded.

However, Rudy Giuliani claimed that no one can be trusted anymore, particularly when it comes to the New York Times. He based it on the new book by Bob Woodward, which he said was balderdash.

"This is totally false, Chris," Giuliani said. "Completely 100 percent false. Now, why doesn't he call me about it? If this is a search -- if this is Bob Woodward, icon of Washington, search for the truth, you don't call me? You don't call Jay Sekulow when you say [lawyer John] Dowd told [Robert] Mueller that the president was lying or would end up in an Orange jumpsuit or something like that? Jay Sekulow completely denies it. And Jay says he never called me. I know Jay's number. He knows Jay's number. Woodward has interviewed me for other books. The reason I asked for the tape recording is I know he tapes the conversations."

If Woodward did record the conversations for the book, Giuliani wanted the tape to be heard by a reliable third party. Cuomo volunteered to be the person.

"There's no confusing Woodward with Michael Cohen," Cuomo said. "I mean, completely opposite ends of the spectrum. Even bringing him up in the context. Woodward is a man worthy of respect. That's all I'm saying."

The former New York mayor disagreed, saying he has no respect for someone who refuses to call him to verify the story. He noted the “diaper” anecdote in Woodward’s book never occurred.

Giuliani speculated who the appointee was. He said it could be a low-level person, someone working out of the Eisenhower Office Building instead of the West Wing.

"Well, number one, I don't know how much of it to believe. Is it a Trump appointee? Is he in the White House? Is he phoning it up? How much is the Times complicit?" Giuliani asked.

Cuomo wondered how The Times could be complicit. "You think they'd risk their reputation on a kill shot like this if it was proven to be false?"

Giuliani said he doubted they would, however, it doesn't make him trust The Times.

"You believe this anonymous person either doesn't exist or isn't telling the truth?" Cuomo asked.

"I didn't say that," Giuliani shot back. "I said I don't know. I don't think he's telling the truth. But he may be a guy inside the White House. He may be upper level, lower level. Maybe he's in the old executive office building. A whole bunch of other things. But I don't trust anything I read anymore, not after the stuff that's been done to me, the latest one being the great wonderful totally honorable Bob Woodward, who will quote a scurrilous thing about a public figure and not ask for their version of it."

Cuomo confessed he's concerned about believing what is in the book based on the reactions he's seeing by the president.

"I'll tell you what gives me concern about believing what's in the op-ed and what's in the book. Very often I measure veracity by the reaction," Cuomo said. "I see how people react to stories. And it often tells a lot. What the president has done in reaction to the last two days screams concern that he's dealing with the truth. With him going on a hunt in the White House for who talked to Woodward. For him saying "The New York Times" has to turn over their source to the government as a matter of national security? Do you realize how crazy that notion is, to even suggest, let alone from a president?"