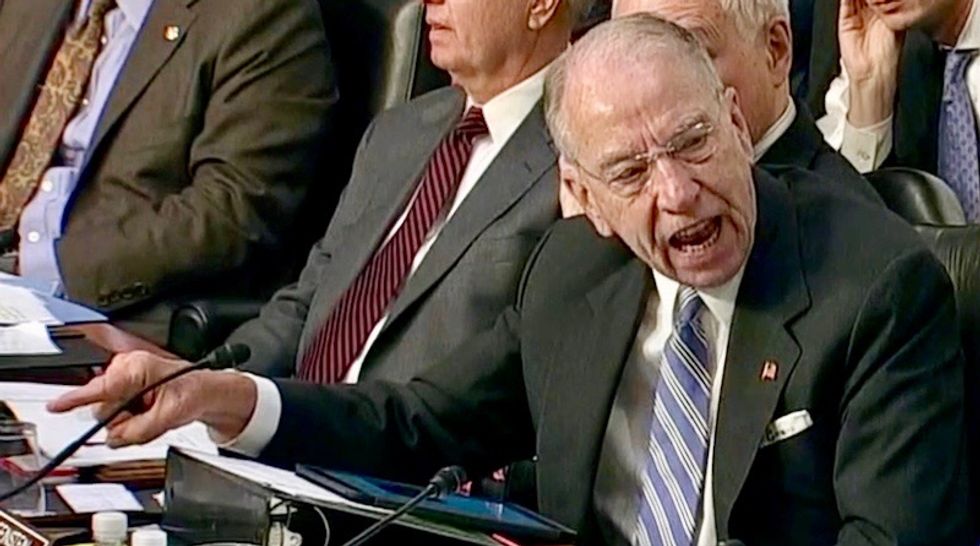 Leahy extensively questioned Kavanaugh about emails that were stolen from Democrats by Republican operative Manuel Miranda in 2002.

Leahy suggested that Kavanaugh may have received stolen emails from Miranda and asked a series of questions which received variations on "I don't recall."

Leahy then referenced the trove of emails that the committee's GOP chairman Sen. Chuck Grassley (R-IA) has kept in a secret file that his Democratic colleagues are not allowed to question Kavanaugh about.

"Now when you worked at the White House did anybody ever tell you they had a mole that provided you with secret information related to nominations?" Leahy asked.

"I don't remember the reference to a 'mole' which sounds highly specific," Kavanaugh claimed. "But it's common, I think, for everyone to talk to each other, at times, and share information."

"So you never received information from an email from a Republican staff member claiming to come from a spying on the Democratic pol?" he asked.

"I don't re—uh, I'm not going to rule anything out, Senator, uh, but if, if—I did I wouldn't have thought that, uh, anything, of the, uh, literal meaning of that," Kavanaugh said, chuckling awkwardly.

"Would it surprise you if you got an email saying that you got that from somebody spying?" Kavanaugh asked.

"Well, is there such an email senator? I mean, I don't know, That's the, uh, yeah" Kavanaugh said.

"Well, we'd have to ask the chairman what he has in his confidential material," Leahy said.

At that point, Grassley erupted for the second time in two days.

"Hey, just stop a minute here!" he yelled at Leahy. "You're talking about the period of time he was White House counsel, that material is available to everybody."

"So that bit of the material about him that's marked committee confidential?" Leahy asked. "If that's what the chairman's saying we have a whole new series of questions."