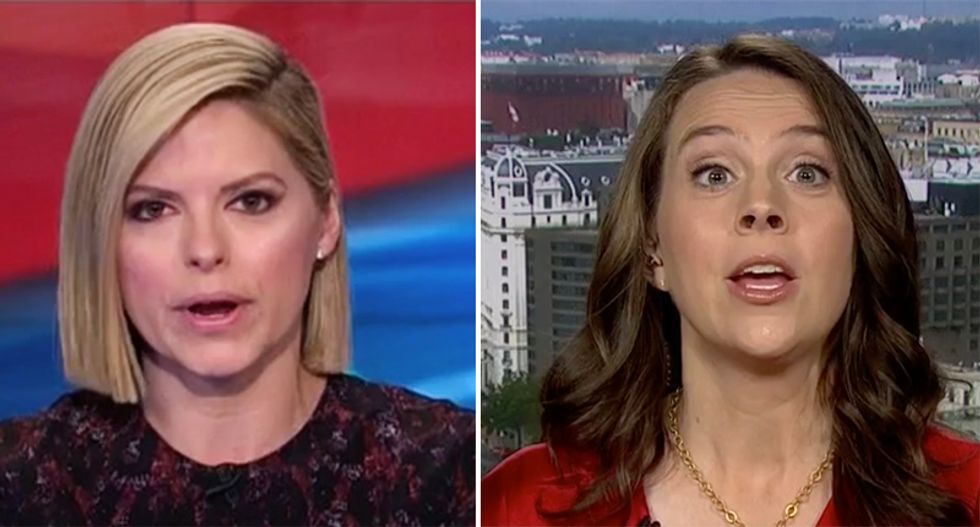 During a frenzied defense of embattled Supreme Court nominee Brett Kavanaugh, a spokesperson for a conservative advocacy group was called out by CNN's Kate Bolduan for calling the alleged sexual assault "boorish horseplay."

Speaking with the CNN host, Carrie Severino of the Judicial Crisis Network admitted that her group is launching a $1.5 million ad blitz to get Kavanaugh -- who is reeling from the accusations made against him by Christine Ford dating back to high school -- over the finish line and onto the Supreme Court.

"We have he says, she says, she makes this allegation, two people she names in it both say it didn't happen," Severino began. "I think it is still important to have a sense of other women who knew him at the time and can say, was that characteristic of how he comported himself in high school? We have 65 women saying 'no, that's not the Brett Kavanaugh we knew and some of them even dated him. You would think if this was typical aggressive behavior they would have seen it."

"Look, her allegations cover a whole range of conduct from boorishness and too rough horseplay to attempted rape," Severino suggested. "If you go to rape, yes, that is a really serious allegation, but this is why it will be useful to have this hearing, so we can even figure out what some of the specifics on those allegations are."

"I want to make sure, though, that that hearing --," the spokesperson continued, before Bolduan cut her off.

"I don't think anywhere in there she's saying this is boorish horseplay at all in her letter, " the CNN host shot back. "I don't think that's at all what she's suggesting."

"She's certainly implying it's attempted rape," Severino continued on. "You have to look at -- there's 35 years of memory that we're trying to play with here. and I'm saying that the behavior she described could describe a whole range of things."

"I know her perception of it was one way," she insisted. "I'm just saying, I think we have to get all of the facts. that said, Judge Kavanaugh said it didn't happen at all -- under any interpretation. He said I wasn't at a party like that, that this didn't happen, period."