Megyn Kelly lays out what Kavanaugh’s defenders will say: ‘Maybe he blew her off and she had an axe to grind’ 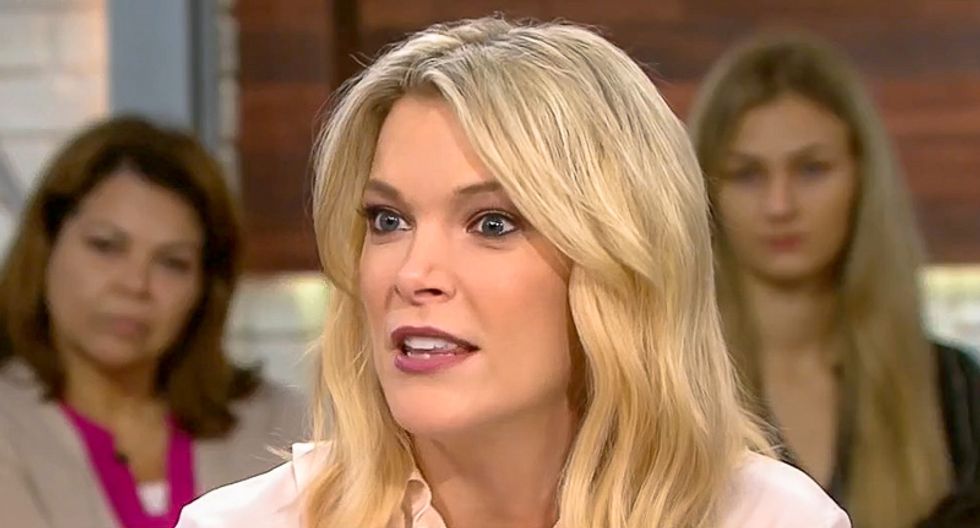 NBC News host Megyn Kelly asserted on Monday that Supreme Court nominee Brett Kavanaugh should be confirmed unless the woman who has accused him of sexual assault can prove that she's not lying.

During her Today Show program, Kelly argued both sides of allegations made by Christine Blasey Ford, who accused Kavanaugh of pinning her to a bed and sexually assaulting her when they were teenagers.

According to Kelly, the allegations against Kavanaugh are "dicier" than sexual accusations made against Roy Moore before he lost his campaign for the Senate in Alabama.

"She is a Democrat [sic] donor," Kelly said of Ford. "Her lawyer is a well-known Democratic activist. Her lawyer, by the way, was very defensive of Bill Clinton when he got accused by Paul Jones, and said that one allegation of Bill Clinton taking out his private parts in front of Paul Jones wasn't enough for sexual harassment."

Kelly said that Ford could have first mentioned the allegations to her husband in 2012 because of Kavanaugh's "ascent to the federal bench."

"If you're going to argue it on his side, you could say he was ascending in the halls of power," Kelly explained. "He was getting on the D.C. Circuit of Appeals. She's sitting there -- maybe she had a negative experience with him."

"Maybe he blew her off," the NBC host continued. "This is what defenders would say, right? She been harboring -- she had an axe to grind about him and she lays the foundation as a Democrat [sic] donor, saying I don't want -- I'm just going with the most dramatic theory."

Kelly offered what she said was a "legitimate" defense of Kavanaugh.

"It's been 34 years," Kelly said. "He was allegedly 17 when it happened. How is he supposed to defend himself? There's a reason we have statutes of limitation in this country and that's because -- this isn't a criminal case -- but that's because memory fades, details fade and it's impossible for him to prove a negative."

Kelly also offered an argument on the side of Ford.

"If you're going to make up an allegation about a guy just to scurry the nomination, to ruin the nomination," she opined, "why do you put another person in the room? Her allegation is that years ago they were at a party... and that Kavanaugh got her on a bed, was pressing up against her and then she tried to scream and he put his hand over her mouth."

"And there was a third person named Mark Judge, a friend of Kavanaugh's, who jumped on top of them... and she managed to run to a different bathroom and save herself," Kelly added. "If you're going to make something up to hurt somebody, why do you put another person in the room? And why do you choose a friend of the alleged perpetrator?"

But in the end, Kelly said Kavanaugh should be confirmed unless Ford's allegations could be verified.

"People are going to look into her history as they should if they are going to derail a Supreme Court nomination," Kelly insisted. "Is she some sort of proven liar? Has she accused others? This is what we saw in the Duke case."

"Remember, the woman came forward, she accused people of rape, turns out it was all lies," she said. "That doesn't mean that's the case here."

"If [Kavanaugh] has a history of sexually attacking a woman we need to know, and if they can't prove it to people's satisfaction then he should be confirmed because Trump gets his vote."

(Note: The headline of this article has been updated for clarity.)