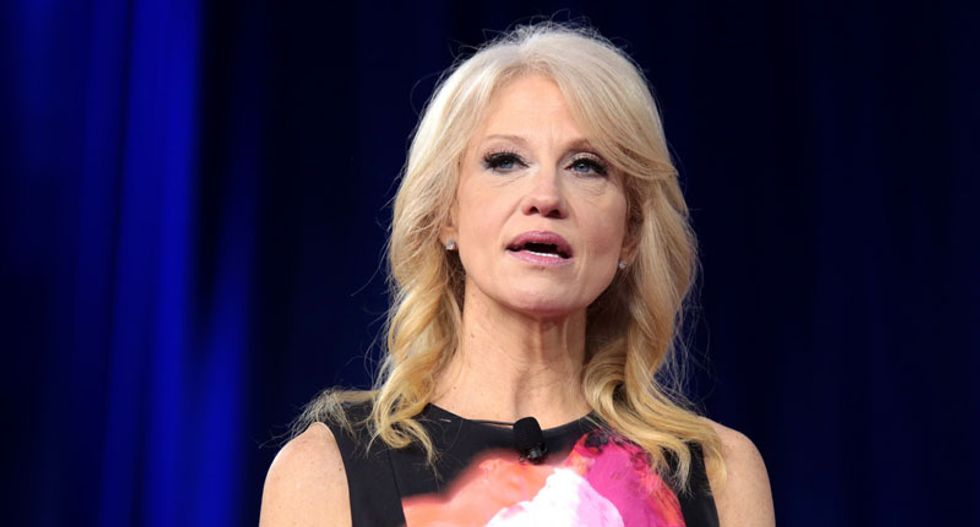 A panel of women on MSNBC Sunday wondered about the timing and purpose of senior White House counselor Kellyanne Conway coming forward about her sexual assault now.

In an interview with CNN, Conway came out about her "empathy" for sexual assault, sexual harassment and rape survivors and then dropped the bombshell that she is a survivor herself.

“I don’t expect Judge Kavanaugh or Jake Tapper or Jeff Flake or anybody to be held responsible for that. You have to be accountable for your own conduct,” she said to Tapper.

Conway said she had “just had it” with what she called politically motivated accusations. She went on to say that the hearing for Brett Kavanaugh shouldn't be allowed to become "a meeting of the #MeTooMovement."

Conway had confessed in a 2017 Politico interview that she's had her own experience.

“Yes, of course, I’ve had a #MeToo moment, but nobody cared about that," she said.

It's unclear if Conway ever reported her experience or if the information is well known about her experience, but it prompted the MSNBC panel to ask why she's coming out now.

Fordham University Prof. Christina Greer noted it was odd to see Conway tack onto her personal story that she believes in personal responsibility and that men aren't responsible for her experience.

"The fact that she then adds on we have to be responsible for our own conduct, that is the antithesis of what so many women are saying," Greer explained. "We are actually not responsible for men who overstep their bounds in sexual harassment, sexual assault or rape. So, yes, it's great that she empathizes with women, however, she upholds an agenda from this particular president and this party that is antithetical to women's rights and freedoms every day."

Liz Plank, who served as the executive producer on "Divided States of Women," wondered where Conway's empathy was when 19 women accused Donald Trump of sexual harassment or sexual assault.

"The women who came forward, the 19 women who say Donald Trump did something too in terms of sexual misconduct," Plank wondered. "We are living through really, really crazy times where the scope of an FBI investigation around a sexual assault is being determined by a person who brags about sexual assault. The president of the United States has bragged about engaging in sexual assault, is responsible for overseeing this whole investigation and that's very scary."

GOP betting on ‘sadism’ — and if they’re right we’re all heading into the ‘abyss’: columnist

Republicans are testing out sadism as a political strategy, and there are dire consequences if their bet pays off, warns a columnist for The Daily Beast.

Donald Trump and his would-be successor Ron DeSantis have centered the GOP around tormenting and humiliating the vulnerable, according to Daily Beast columnist David R. Lurie, but the Florida governor's insecurity have driven him to more obvious and clumsy attempts to cause torment.

230 pilot whales stranded in Australia, 'about half' feared dead

A pod of 230 pilot whales was found stranded on the rugged west coast of Tasmania Wednesday, with Australian officials saying only half appeared to be alive.

Aerial images showed a devastating scene of dozens of black glossy mammals strewn across a long beach, stuck on the waterline where the frigid southern ocean meets the sand.

French left under pressure over violence against women

Two key parties in France's left-wing alliance were Wednesday facing crises after senior figures were accused of violence against women, with a Greens party chief stepping back from his role days after a colleague from hard-left France Unbowed.

Julien Bayou was "suspended from his role" as co-president of the Greens' bloc in the National Assembly (lower house), the party said late Tuesday, after he was accused of psychologically abusing an ex-partner.