MSNBC’s Nicolle Wallace unleashes on Trump’s ‘deficiency' at Pennsylvania 9/11 appearance: ‘There’s something wrong with him’ 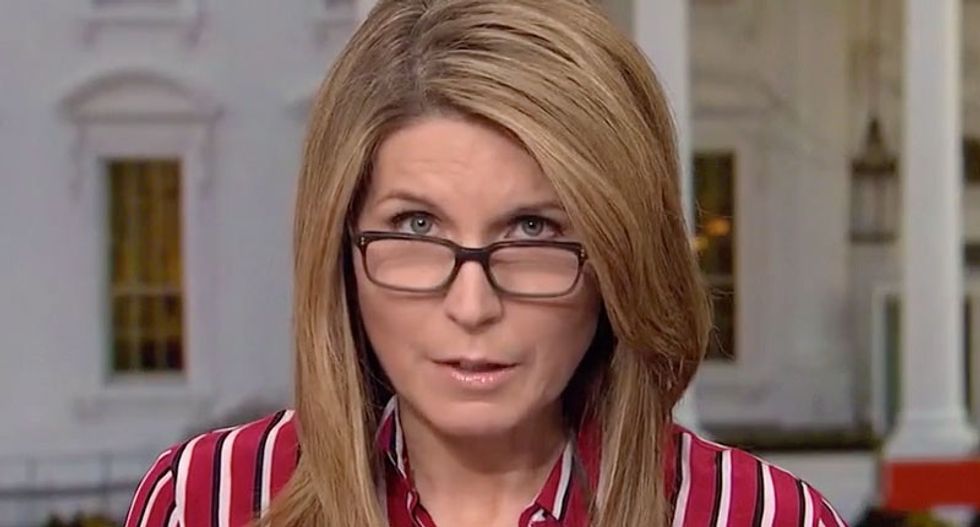 Trump disembarked Air Force One pumping his fists in the air as if he was about to attend a rally, rather than remembering the lives lost as Americans fought to save lives from the terrorists headed to the U.S. Capitol.

"Every president handles the role of consoler-in-chief differently," Wallace explained. "But it is in the moments that a president has to channel the nation's grief that we see his true nature."

She recalled President Barack Obama's "finest moments" responding to mass shootings after Newtown and Sandy Hook as well as the State of the Union addresses that followed. Wallace then remembered the ways in which President George W. Bush connected with first responders who ran into collapsing burning buildings on Sept. 11, hoping they could save even a few lives.

"So when Donald Trump traveled to Shanksville, Pennsylvania, today, to honor the families of the victims of flight 93, it is fair to say that he hadn't quite passed the consoler-in-chief test yet," Wallace continued. "The fact that he woke up on a day like September 11th, and started tweeting attacks against his own Justice Department and FBI, didn't help him set the tone for solemnity or respect. Neither did this image. That's him pumping his fists on the tarmac upon arrival."

She said that the bizarre statements about 9/11 don't make things any better.

"I am a harsh critic of this president, but even I do not believe that he got off the plane and intended to offend anybody," Wallace conceded. "So this, to me, this inability to control an impulse to pump your fists on 9/11 on your way to Shanksville. I've been there a couple times. It is like, I mean, not to be too graphic, but there were remains in the trees. It is as sacred of a memorial as exists in this country. And to see that image, I'm back to the questions about his competence and fitness. There's something wrong with him."

Panelists agreed, noting it seemed Trump viewed this as a kind of political rally, rather than a memorial. They recalled other incidents where he was supposed to give solemn speeches and instead flubbed it.

"I talked about presidents Obama and Bush because, again, you know, President Obama at that moment, I think, spoke for every American," Wallace continued. "I think Newtown was something that was -- everyone felt that pain and he spoke to it for us. I think 9/11, as I said, you know, the policies that ensued were plenty controversial but in that moment, George W. Bush seemed to be able to capture the sort of commitment of our country to build ourselves back and stand up to them."

She noted Trump seems to be missing that "chip" in his being.

"During the convention. Before he was elected. The one-week debate with the widow of Sgt. La David T. Johnson whose husband died," she continued. "Why are we so timid of talking about what seems to be a real deficiency in his character?"