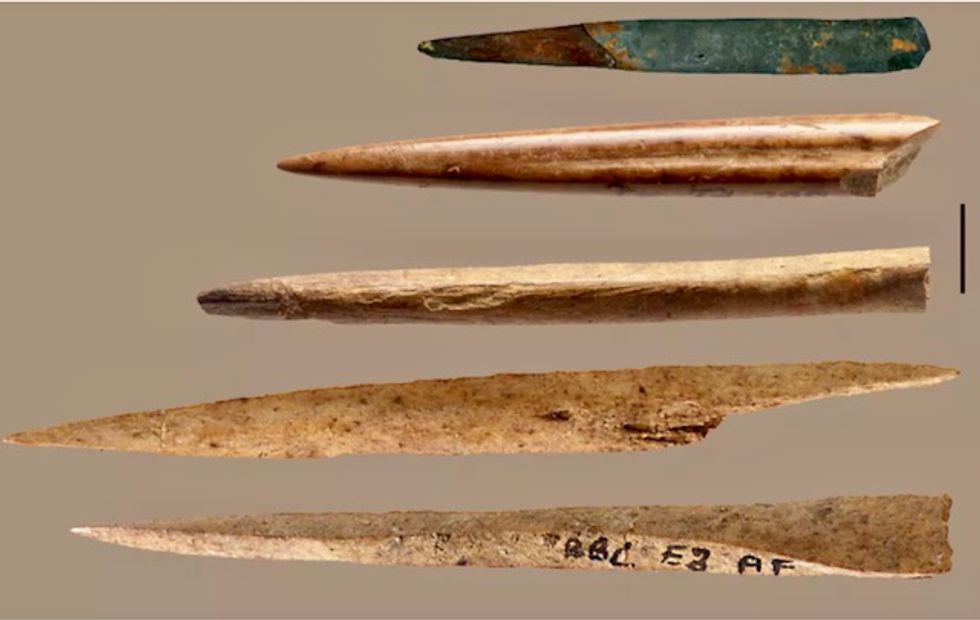 Bone artefacts from various South African Stone Age archaeological sites have been interpreted as arrowheads. J. Bradfield (as published in Bradfield, J. & Choyke, A. 2016. Bone technology in Africa. In: H. Selin (ed.), Encyclopaedia of the History of Science, Technology, and Medicine in Non-Western Cultures, pp, 20-27. Springer).

Animals played an important role in prehistoric societies. They were a source of food, raw material, and, sometimes, reverence. Their bones were also used to create tools – for instance, arrowheads. The use of animal bone as raw material for tools dates back at least 1.8 million years.

In several parts of the world certain animals and the tools made from their bones were held by their makers to be symbolically important. For instance, in South Africa the frequent depiction of certain animals such as eland and rhinoceros in rock art illustrates their cultural importance.

Some animals served as important symbols of power and religion among hunter-gatherer and Bantu-speaking farmer groups.

But it wasn’t clear whether and to what extent certain animals’ symbolic importance translated into other aspects of society, such as technology and tool manufacture. That’s because most bone tools recovered from archaeological excavations are so pervasively modified that it is impossible to identify the type of animal from which they were made based on anatomical markers. Archaeologists could only assume that people made tools from the same animals they preyed on for food.

But we’ve used emerging technology to provide some answers. A recent study by scientists in South Africa and the UK has identified the animals used by people in the past to make bone arrowheads.

This is the first time a species-level identification of bone tools has been undertaken in southern Africa. Future research could offer greater insight into how ancient people chose the raw material for their tools. This, in turn, could provide clues about the social, ideological and technological considerations that governed their choices and how these may have changed through time.

We used an analytical technique called Zooarchaeology by Mass Spectrometry (ZooMS). This uses unique collagen peptide markers (which are the amino acids that make up the organic component of bone) to distinguish between different groups of animals. It can sometimes identify bone to the level of species.

The results indicate that farmers used fewer species for tool manufacture than they hunted for food. We also found that certain animal species were used for tools that didn’t appear to have been hunted for food.

We identified a narrow range of antelope from the bone tools from nine archaeological sites from Gauteng and Limpopo. Of particular interest is the presence of sable, roan, zebra and rhino. Until now, we didn’t know that these species’ bones were used to make tools in southern Africa.

Sable and roan were important sources of supernatural potency among the Bushmen. But their symbolic importance to early farmers is unknown.

Rhinos, on the other hand, were an important symbol among both hunter-gatherers and farmers. Rock engravings of rhinoceros (as well as of raon, sable, sheep, wildebeest and giraffe) are common in our study area. Rhinos were likely associated with shamanism and rain making by the Bushmen, and leadership by the farmers.

Despite the symbolic importance attached to the rhinoceros, they were still actively hunted and consumed by farmers. This indicates that their symbolic significance didn’t spare them from becoming food.

If we accept that rock art and the animals it depicted were believed to be imbued with supernatural powers, then it is conceivable that the tools made from their bones were viewed in a similar way.

It’s worthwhile noting which species don’t appear to have been targeted for tool manufacture.

There are many different animals in the study region whose bones are the correct size from which to make arrowheads. Yet, despite a wide range of animal remains found at the sites, only a fraction were used to make bone arrowheads. Most of the bone tools come from bovids. The two exceptions are zebra and rhinoceros. Why might this be?

Carnivores’ long bones, for instance, are mechanically ill-suited for impact-related tasks like arrows. That may explain why we didn’t find any bones belonging to species like jackal, leopard or lion. But we’re not sure how to explain the absence of other species, such as pigs, whose bones share the same broad mechanical properties as cows and antelopes and which are present at all the archaeological sites.

The apparent avoidance of certain animals in bone tool manufacture may be understood in terms of their bones’ fitness for purpose: that is, could it perform the desired task? Yet, it is clear that this was not their only consideration and that culturally-mediated technological strategies were likely a factor too.

This study looked at only a small sample of bone tools from a small geographical area. There is clearly much more scope to improve our understanding by expanding the study to include older contexts from other parts of southern Africa. This line of enquiry has already started to gain traction in Europe and North Africa.