'How do you have a show?': Michael Avenatti explodes as Fox News host Tucker Carlson interrupts and insults him 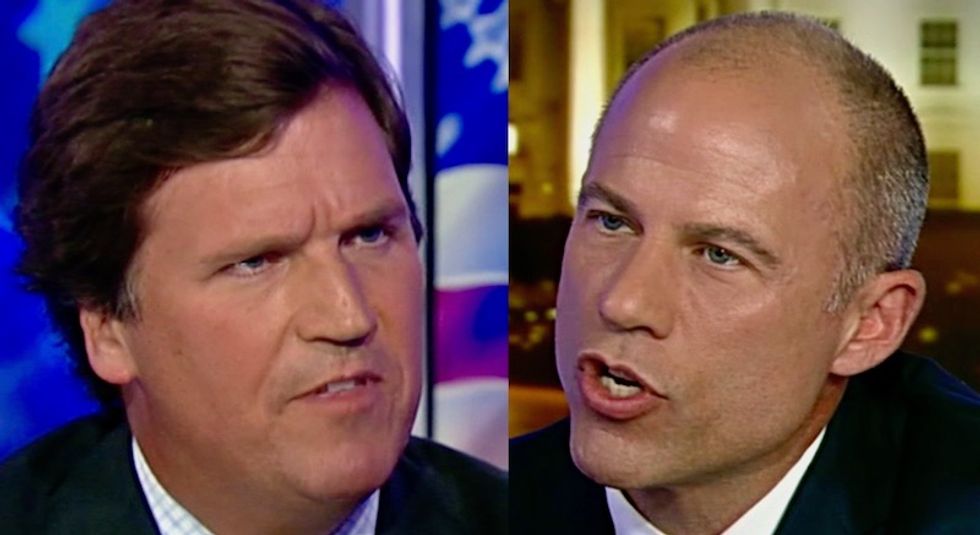 Carlson repeatedly claimed that Avenatti was "exploiting" his client because he is wealthier than her, and accused Avenatti of building his career off her.

Carlson opened the segment by pointing out that Avenatti had taken issue with him referring to him as a "creepy p*rn lawyer." Carlson suggested that "as a gesture of good will," he would not use the offensive title—a courtesy he broke at the end of the interview as he insulted his guest and then cut him off and threw to commercial without giving him an opportunity to respond.

Carlson ran footage of Avenatti telling a rally crowd that Russian's actions in the 2016 campaign were the equivalent of an act of war, which Carlson objected to.

"You're using reckless rhetoric on a subject you don't really understand," Carlson said.

The two men then began sparring about Trump's affair with Stormy Daniels, with Carlson suggesting she was a prostitute paid for her services and in no position to complain.

"Why is it that you don't call Donald Trump the Creepy P*rn President," Avenatti said. "He's the one who had sex, with a 4-month-old son at home, with my client, without wearing a condom. But you don't want to acknowledge that."

Carlson said he agreed that the affair happened but refused to answer Avenatti's questions about why Carlson is fine with President Donald Trump continuing to lie about it.

At one point Avenatti asked Carlson if he ever watched adult films.

"You got me, I like humiliation p*rn, that's why I want you on CNN,' Carlson said. "Boy, you are a moralizer for a guy who does what you do. You're a little moralizer! We're in church now."

Carlson maintained that former Trump attorney Michael Cohen's guilty plea was not evidence of any wrongdoing in the 2016 campaign.

"Do you not follow the news?" Avenatti asked. "How do you have a show?"

After leveling his criticism, Carlson then cut Avenatti off as he asked to be allowed to respond.

"Creepy p*rn lawyer, good to see you," Carlson said, cutting his guest off.