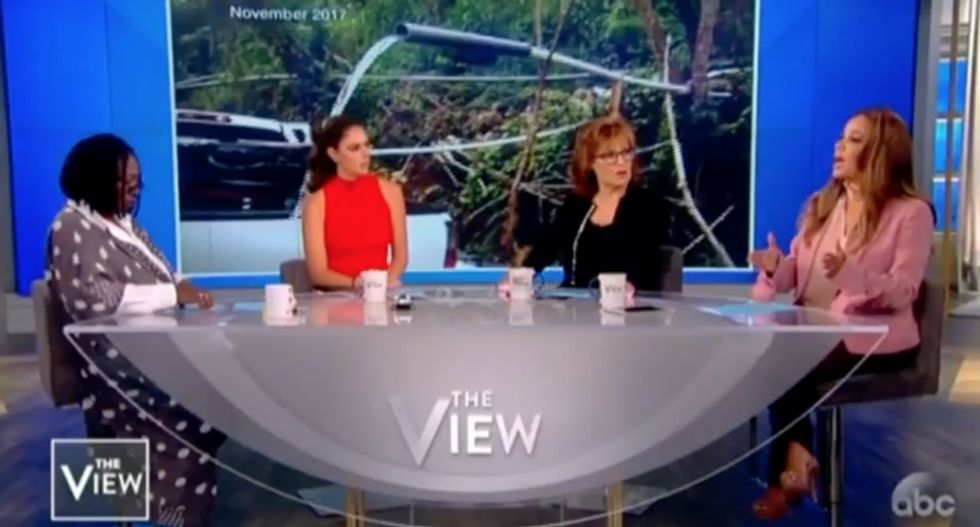 As Hurricane Florence bore down on the Carolinas amid predictions of unprecedented devastation, the View opened Thursday with a brutal assessment of President Trump's performance after Hurricane Maria wiped out Puerto Rico. The table also questioned the president's overall competence, his recently revealed decision to transfer millions from FEMA to ICE, and even his connection to objective reality.

Abby Huntsman, a conservative who typically holds more supportive opinions of President Trump, came out swinging like Ronda Rousey. "There are some things that are indefensible and so out of touch from reality, and a lot of it is because he hasn't been on the ground there since right after it happened," she said. "A lot of these deaths took place after that storm because of the lack of resources."

Huntsman compared Trump's performance unfavorably to that of President George W. Bush after Hurricane Katrina flooded New Orleans. "You remember it was four days after that where he was complimenting the head of FEMA at the time, Michael Brown," she said, mocking Bush's infamous "heckuva job" remark. "I can't imagine a year later George Bush saying what President Trump did, because he knew politically you just don't do that."

Co-host Sunny Hostin was even harsher. "It's humiliating. It's embarrassing for our country and I don't think this president cares," she said angrily, noting that "the deaths in Puerto Rico eclipse Katrina by 1100". Hostin's mother is Puerto Rican, and her family was impacted by the storm.

"I don't know if he doesn't care about Puerto Ricans," Huntsman countered, but she wasn't leaping to the president's defense. "I do think he cares about covering his own butt and he never wants to admit defeat." Huntsman also noted Trump's longstanding feud with the mayor of San Juan as just one reason for his inaction.

Meanwhile, Whoopi Goldberg took issue with HHS's claim that the "money couldn't have been used for disaster relief."

Hostin returned to Trump's transfer of FEMA funds to ICE, describing an interview she conducted with a hurricane victim in Puerto Rico. "She showed me the letter from FEMA saying they would give her $500. That is all they would give her," Hostin said, describing the remains of the woman's home. "And you mean to tell me this administration takes away $10 million FEMA dollars, to make sure they can put kids in cages? That's the focus of this administration?"

Hunstman agreed, slamming Trump's statement as an indication of his "disconnect as a leader".

"And you don't throw paper towels at them either," added Hostin.