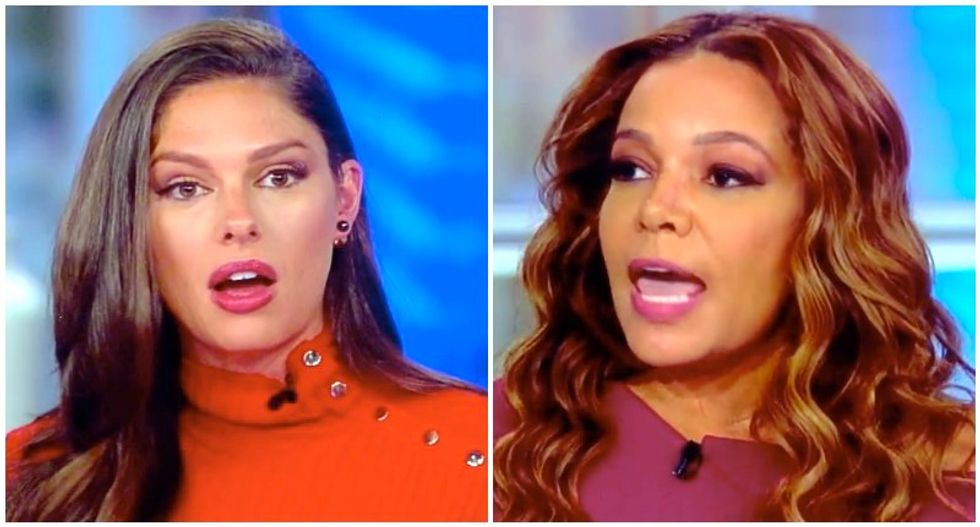 "The View" co-host Abby Huntsman lamented the ongoing ugliness of the Brett Kavanaugh confirmation process -- but Sunny Hostin reminded her that Republicans were at fault.

Co-host Joy Behar pointed out that GOP senators knew about a second accuser last week but insisted on rushing Kavanaugh to a vote after Christine Blasey Ford went public with sexual assault allegations.

"There were rumors about this second accusation last week, and then Lindsey Graham and (Mitch) McConnell come out and say we're going to ram it through, we're going to plow it through," Behar said. "They figure they'll push him in, he'll be in, they'll get their way -- and then we'll find out the guy is guilty. What good is that?"

The conservative Huntsman agreed the situation was awful, but she didn't identify how things should have been handled.

"What really has bothered me through this, I think there's a much better way this could have been handled from the beginning," Huntsman said. "I feel for these women because both of them have now said, Dr. Ford and (Deborah) Ramirez, said we didn't want to put our name out there and have to potentially publicly testify."

Huntsman then suggested Democrats were the villains in the nomination debacle.

"In Ronan (Farrow)'s piece he talks about how Democrats were digging through it, and they're stuck with the position of, either it's going to be told for me and I can't control the narrative, or I have to put myself out there," she said. "These are people's lives that are on the line, and now they're dealing with death threats in Kavanaugh's family and with these women. It makes me really sad."

Hostin shot down Huntsman's bland argument, saying the GOP majority had purposefully botched the investigation to push Kavanaugh onto the Supreme Court.

"How could this have been done better?" Hostin said. "I've been saying it for weeks -- you conduct a background investigation. The FBI, Federal Bureau of Investigation, the term 'investigation' is in the name. They are in the profession of doing that. That's how you handle this kind of thing."

She said the FBI had investigated sexual harassment claims by Anita Hill against Clarence Thomas during his confirmation hearings.

"You just open up the background investigation and do it that way," Hostin said. "It's transparent and nonpartisan. Why is Ronan Farrow the chief FBI agent of these cases? It's absurd."