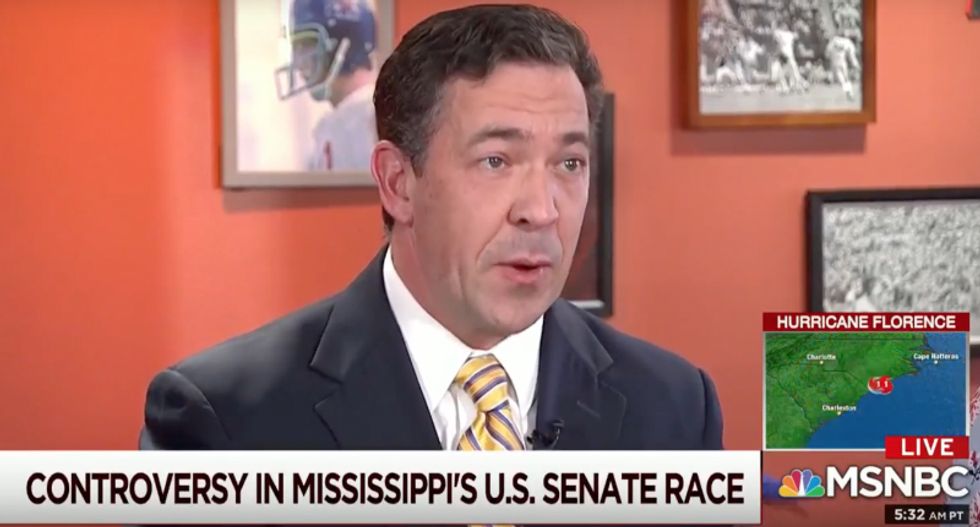 Mississippi Senate candidate Chris McDaniel, a Republican upstart who has fought with his own party, was loudly booed by a live audience made up of the very people he hopes to represent when he said black Mississippians had spent a century "begging" from the federal government. He also shared his views on the Confederate flag and hip hop music.

Pointing out the 38% of the state population is black, co-host Eddie Glaude asked McDaniel how he planned to represent the "whole state" given his support for the Confederate flag and his stated belief that hip hop causes gun violence and cultural decay.

While dodging the hip hop question, McDaniel said "the thing about flags, like every symbol, is they are subject to interpretations. If 65% of the people have voted to keep that flag, we should respect their wishes."

"The flag can be offensive to some," he said, implicitly acknowledging the role of the confederate flag in terrorizing and oppressing the black communities he hopes to represent. "But almost all symbols are offensive to someone," calling to mind the Nazi swastika, Imperial Japan's rising sun, and the ISIL flag.

But McDaniel drew loud boos and outrage from the audience when he said his campaign would appeal to African American voters by asking them "after 100 years of relying on big government to save you, where are you today? After 100 years of begging for federal government scraps, where are you today?" McDaniel also failed to bring up the role of slavery, nearly a century of Jim Crow laws and "separate but equal" education policies, redlining, and other racist state and federal policies that have historically hindered progress for black Americans.

McDaniel continued trashing his own state, saying that Mississippi had been "dead last for 100 years," and that due to reliance on federal funds "we aren't able to create the prosperous environment to grow". These federal streams, which McDaniel would presumably eschew, include programs like Social Security, Medicare/Medicaid, SNAP, SSI, and Temporary Assistance for Needy Families, all which benefit Mississippi, which has high rates of unemployment and poverty.