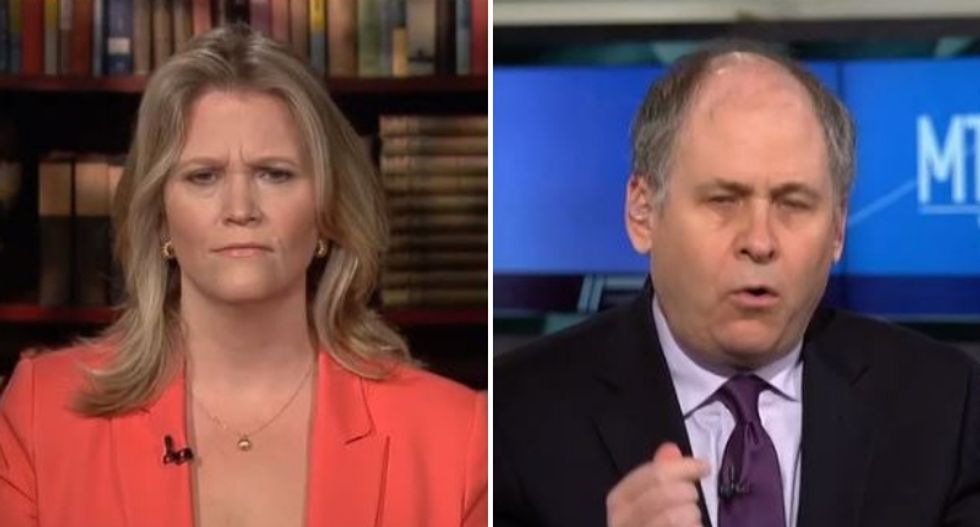 A fight ensued during an MSNBC panel discussion after an alumna of George W. Bush's White House insisted that her old colleague Brett Kavanaugh is a "good, good guy."

"That actually was not the allegation," Daily Beast columnist Jonathan Alter noted. "It's a gross exaggeration."

Fagen went on to say that she was comfortable with Kavanaugh's politicized talking points during his Thursday hearing because he was "defending his honor and his very good character."

"Hundreds of women who've worked with him, worked for him, were taught by him, attest to his good nature, his mild-mannered -- myself included," she continued. "He's a good, good guy."

Fagen then reiterated that the nominee wouldn't be too political on the bench of the Supreme Court in spite of his attacks on the "left" during his hearing because she "knows" him and his career -- and drew a rebuke from Alter.

"He just didn't have to go there," the columnist said.

"It's also the truth!" she interrupted.

"Wait a minute," Alter said, "can I just make a point here?

The columnist noted that Donald Trump "revved up" the candidate by calling him about his Fox News interview, suggesting his emotional display in the hearing about the sexual assault allegation could be replicated in the future.

"He did not come across like a judge who deserves to be promoted to the Supreme Court," Alter said.

The two then argued about the "factually untrue" statements Kavanaugh made during the hearing before host Katy Tur cut them off.