White House officials agree with NYT op-ed: 'Dozens and dozens of us' wish we'd written it 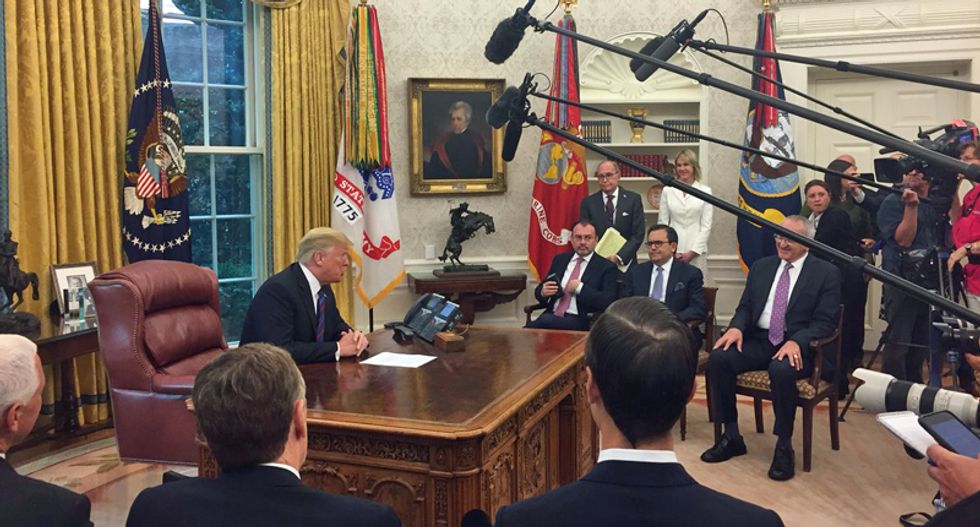 President Donald Trump is consumed with paranoia after the publication of Bob Woodward's explosive new book, and the highly unusual anonymous op-ed by a senior administration official.

Both the book and the New York Times op-ed reveal White House staffers believe the president is unfit to serve and are actively thwarting his most dangerous decisions, and Trump is angry and mistrustful of his closest aides, reported Axios.

Two senior officials reached out to the website to say that the views expressed in the extraordinary op-ed are widely shared within the White House.

"I find the reaction to the NYT op-ed fascinating — that people seem so shocked that there is a resistance from the inside," one senior official told Axios. "A lot of us [were] wishing we’d been the writer, I suspect ... I hope he [Trump] knows — maybe he does? — that there are dozens and dozens of us."

Numerous current White House officials have told the website they consider the president unstable and dangerously slow, and they revealed that Trump is so paranoid about his staff that he carries a handwritten list of suspected leakers.

"He would basically be like, 'We’ve gotta get rid of them, the snakes are everywhere but we’re getting rid of them,'" said a source close to Trump.

Trump quizzes staffers about which colleagues they trust, but few aides trust one another in the competitive atmosphere inside the White House.

"When he was super frustrated about the leaks, he would rail about the 'snakes' in the White House," said one source who has discussed leaks with the president.

He's especially paranoid about officials he doesn't personally know, and the problem is growing worse as loyalists leave the White House.

"People talk about the loyalists leaving," said one source close to Trump. "What it really means is [that there'll be] fewer and fewer people who Trump knows who they really are. So imagine how paranoid you must be if that is your view of the world."