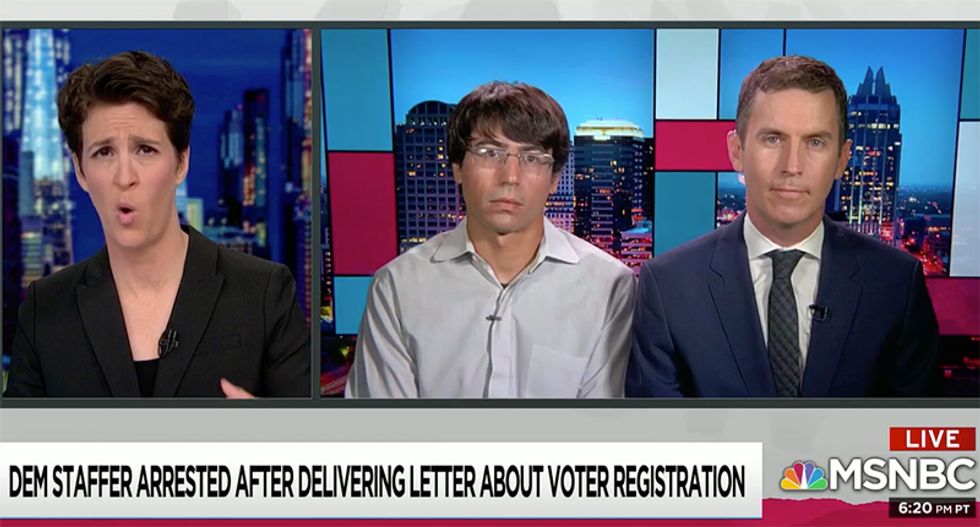 Over 80 percent of the students at the school are black.

"The guy's out now, but here's like the -- sort of like the favorite little grace note for me in this whole story," Maddow said. "After they arrested the congressional candidate's field director -- reportedly after confirming with him that he worked for a Democratic campaign specifically -- after they arrested him and they held him and then they finally let him out, even after they finally let him out, they kept his phone."

"He is the field director for the Democratic congressional candidate in that district, and the election is less than a month away -- now local law enforcement has confiscated his phone," Maddow noted. "For the crime of handing over a letter trying to make sure that local students at the local black college can vote this time."

"Happy 2018, I know it feels like your TV set should be in black and white as I'm telling this story, but no, this is us now," she worried.

To discuss the scandal, she brought on Mike Siegel, the Democratic Party nominee challenging Rep. Mike McCaul, Sr. in the state’s 10th congressional district, and his field director Jacob Aronowitz.

Aronowitz said Maddow's "recounting of the events was accurate."

"I was arrested and held at the Waller County Sheriff's jail, and the phone was taken, it was confiscated," he recounted. "And at the time of its confiscation, they said they were going to seek a warrant to go through its contents and that didn't happen, and I did get the phone back earlier today."

"The experience was harrowing and it made me reflect on what people in that county deal with on a day-to-day, year-to-year basis," he explained.

Maddow drilled down on one particular point in the scandal in particular.

"And Mr. Siegel -- Mike -- was on the phone on speakerphone, and he heard the question asked as well," he continued. "And honestly, that might have been one of the most chilling parts of the entire encounter, because there's like -- I mean, it's pretty clear where someone's coming from when they ask you a question like that."

The sketch began with Biden, played by James Austin Johnson, getting some bad news from White House Press Secretary Jen Psaki in the Oval Office.