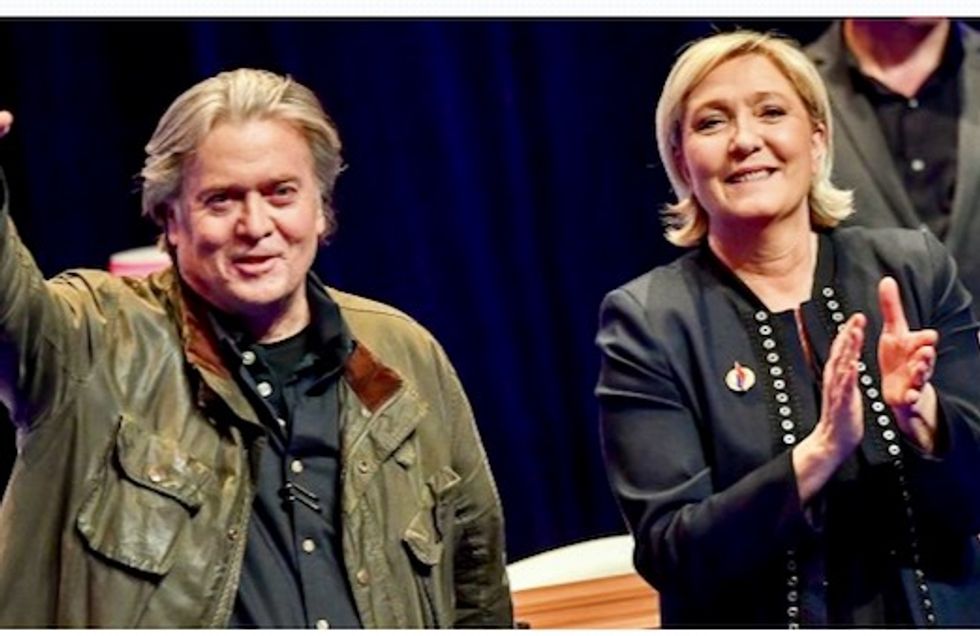 Louis Aliot, a vice president of Le Pen’s National Rally party who is also her companion, said Friday on BFMTV station that she met with Bannon a day earlier in Paris.

According to Aliot, Bannon wants to provide “technical assistance” for nationalist parties ahead of next year’s European elections but that he “doesn’t want to play a (political) role.”

Two years on from helping to mastermind Donald Trump’s successful campaign to become U.S. president, Bannon has his sights set on Europe and he is planning a foundation, called The Movement, to boost far-right parties.

“We’re not going to say ‘no’,” Aliot said with regard to getting help.

Le Pen’s apparent interest in working with Bannon stands in marked contrast to comments earlier this week when she said that only European voices should “shape the political forces ... to save Europe.”

Meanwhile, Le Pen’s legal situation grew murkier on Friday as investigative judges upped preliminary charges against her over the alleged misuse of European Union funds by her and her party.

She is a suspect in a case over payments to parliamentary assistants in the EU parliament who reportedly worked elsewhere, including at her party headquarters.

Le Pen stepped down from her post as a European parliamentary deputy to become a French lawmaker after last year’s legislative elections, but remains shadowed by the case in which some 15 people have been placed under investigation, including Aliot.

On Friday, a judicial official said Le Pen was now being charged with misappropriation of public funds rather than breach of trust. The official wasn’t authorized to speak publicly and asked for anonymity.

Le Pen has other legal issues to contend with, one notable one with regard to her posting of photos on Twitter in December 2015 that showed executions by IS extremists. She was handed preliminary charges in March for distribution of violent images. Le Pen posted the images after the November 2015 Paris attacks by IS that killed 130 people.

Le Pen said Friday that an investigation has also been opened over her September Twitter post of a court document ordering she submit to a psychiatric exam in the case.

“This judicial harassment is becoming terrifying!” she tweeted Friday.