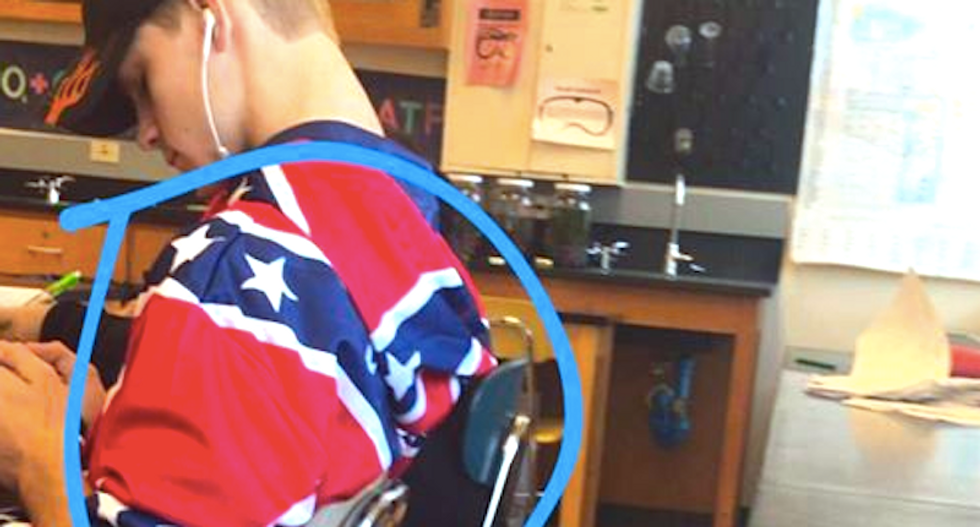 A group of teenagers attacked a white classmate who wore a Confederate flag shirt to their Maryland high school.

The brawl, which was recorded on cell phone video, spilled out of the classroom and into a hallway at Kenwood High School in Essex, reported WBFF-TV.

"The people were just randomly seeing the guy, hearing about him wearing the shirt like that, and then when they just saw him they decided to be rash about it," said student Alex Wilkinson, who was in a classroom next door.

A photo of the teen wearing the flag as a shirt was posted on Facebook by a parent.

"I would like to know what happened to dress codes and school rules??" said parent Chandy Lewis. "Why would someone be allowed to wear this to school and not be told to change it? Just horrible."

Baltimore County Schools prohibit clothing considered to be disruptive to the school environment, including "plainly offensive" messages, but does not specifically ban the Confederate flag.

"Why would his parents let him wear it from the jump, knowing it was going to lead to something crazy," said mother Lashawn Holmes.

School officials confirmed "there was a fight of some sort," but declined to provide additional details about the incident.