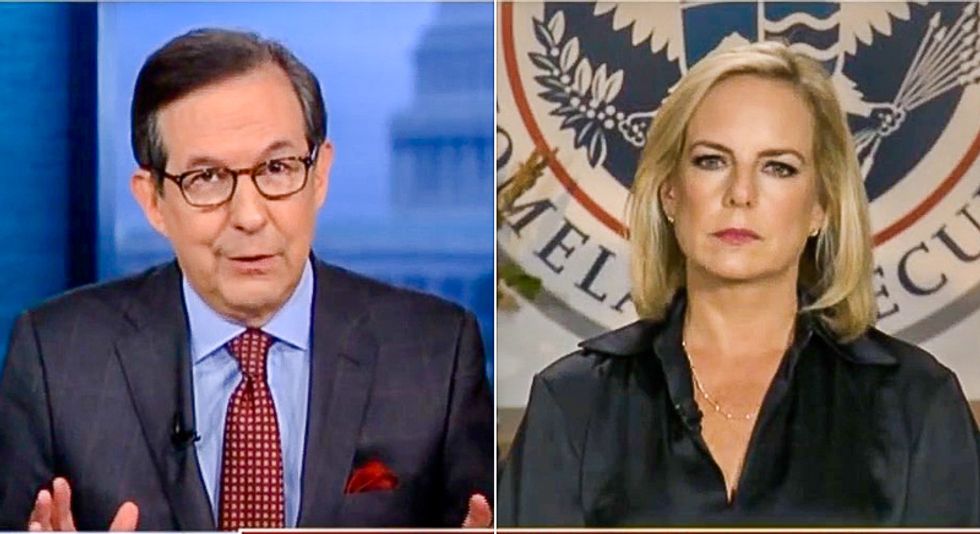 Department of Homeland Security Secretary Kirstjen Nielsen on Sunday admitted that she could not prove that a caravan of migrants headed to the U.S. border is a national security threat.

During an interview on Fox News Sunday, Nielsen railed against the migrants who are fleeing poverty and violence in Central America.

"What the president has been saying and will continue to say and what I've been saying is this caravan is not getting in," Nielsen insisted. "My general message to this caravan is do not come. You will not be allowed in. There is a right way to emigrate to the United States and this is not it."

Fox host Chris Wallace pointed to reports which say that President Donald Trump "may use the same legal authority he did for the first travel ban."

"I fully understand that people from Honduras don't have a right to come in to the U.S. illegally," Wallace said. "But on what basis can you say that this caravan poses a national security threat?"

"We have a crisis at the border right now," Nielsen replied without answering the question. "We are stopping between 1,500 and 1,700 people a day trying to cross illegally into this country. This caravan is one iteration of that."

"Frankly, we see caravans every day with these numbers," she shrugged. "Every possible action, authority, executive program is on the table to consider to ensure that it is clear that there is a right and legal way to come to this country and no other ways will be tolerated."

Wallace pressed Nielsen after she failed to answer his question.

"[Trump] is talking specifically about a provision where the president gets to protect national security," Wallace explained. "We're talking, in many cases here, about women, about children, about babies. How do they threaten national security?"

"This isn't a ticketed event," Nielsen shot back. "You don't have a membership in the caravan. Moment to moment, there are people raising their hand saying they are part of the so-called caravan and there are others... who say they are no longer part of the caravan."

"This is about the rule of law, this is about understanding who is in the flow," she added. "And, Chris, I cannot tell you as secretary of Homeland Security that I know every person in this flow. What I do know is that we stop 3,000 people a year who have travel patterns similar to terrorists."

A Texas man who identified himself as a preacher, armed with a semiautomatic assault rifle and pistol, confronted gubernatorial candidate Beto O'Rourke during a Saturday campaign event and demanded that the Democrat answer whether he "believed in a woman's right to choose," claiming that there are "great" men who are the "product of rape."

The man, a self-proclaimed "minister of the gospel," approached O'Rourke in the middle of a town hall in Hemphill, where the preacher berated the candidate with a barrage of questions about abortion and religion.

During his now-infamous phone call with Georgia Secretary of State Brad Raffensperger, former President Donald Trump implored Raffensperger to help him "find" the 11,780 votes that he needed to overtake President Joe Biden in the Peach State.

Now the Fulton County District Attorney's Office is linking Sen. Lindsey Graham (R-SC) to Trump's efforts to "find" those votes, which Raffensperger had to repeatedly explain to Trump did not exist.