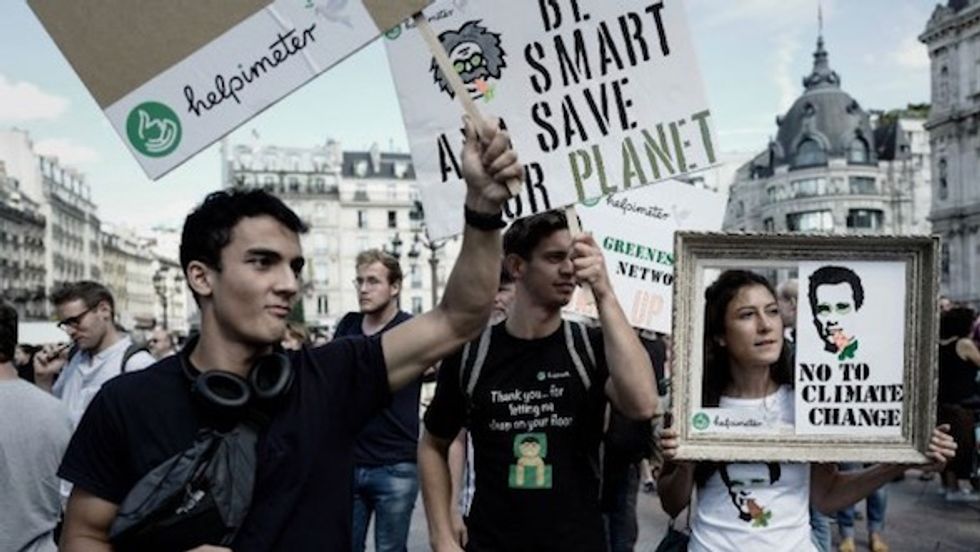 © Philippe Lopez, AFP | In this file photo taken on September 8, 2018 people holding placards gather at the Hotel de ville square, in Paris, to take part in the march for the climate.

The number of climate-related disasters around the world is growing rapidly, humanitarians warned Friday, urging more efforts to prepare and build resilience to looming changes on a warming planet.

Climate shocks are already driving displacement, causing many to go hungry and are sparking or exacerbating conflicts around the globe, humanitarian workers said, cautioning that the situation is quickly deteriorating.

“With climate change, the shocks and hazards are multiplying,” Elhadj As Sy, Secretary-General of the International Federation of Red Cross and Red Crescent Societies (IFRC), told AFP in an interview.

Speaking on the sidelines of a conference in Geneva on the impact of climate change on humanitarian situations around the globe, he cautioned that such “shocks” were “getting more frequent and more severe.”

Friday’s conference was aimed at unpacking the humanitarian implications of the findings in a landmark UN climate report this week, which warned drastic action was needed to prevent Earth from hurtling towards an unbearable rise in temperature.

The Intergovernmental Panel for Climate Change (IPCC) said the globe’s surface has already warmed one degree Celsius (1.8 degrees Fahrenheit) -- enough to lift oceans and unleash a crescendo of deadly storms, floods and droughts and is on track toward an unliveable 3C or 4C rise.

Speaking to journalists in Geneva, he also decried the “increasingly distractive interplay between conflict and climate disasters.”

He pointed out that the world’s 10 most conflict-affected countries, including Syria, Yemen and the Democratic Republic of Congo, are also impacted by extreme weather events, creating a so-called “pressure-cooker” effect.

Laganda pointed to projections that if the planet warms just 2C, 189 million more people than today will become food insecure.

“And if it is a four-degree warmer world ... we’re looking beyond one billion more,” he said, adding that this “is a very, very strong argument for early and decisive climate action.”

“In the 1970s, we used to be dealing with 80 to 100 severe weather-related shocks and hazards” each year, he said, contrasting that to last year, when the number was around 400 -- “four times more.”

While acknowledging that climate-related shocks would likely keep climbing, Sy emphasised that it was not inevitable that such shocks and hazards should “become a disaster.”

“We need to be better prepared with early warning and with early alert,” he said, also stressing the importance for IFRC of continuously having volunteers on the ground in affected communities to help them to adapt to climate change.

The organisation counts some 70 million volunteers around the world, so when climate-linked shocks and hazards hit, they “find us already there,” he said.