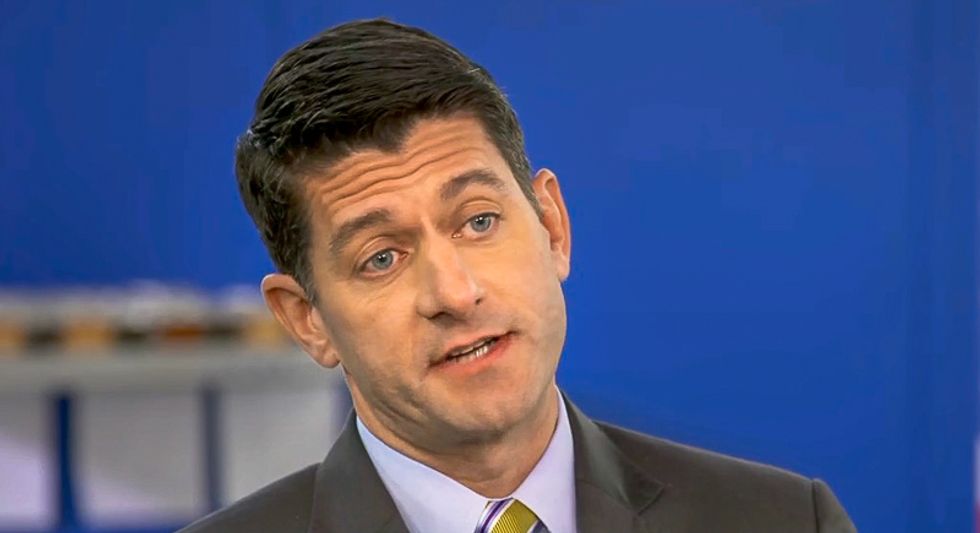 In an interview that aired Wednesday on CBS This Morning, Dickerson began by asking the Speaker if Republicans would maintain control of the House after the midterm elections.

"I think we are," Ryan replied. "I feel pretty good about it. I think our voter enthusiasm is where it needs to be. And more importantly, we have a great record to run on."

Dickerson pointed out that "only 39 percent of the country" approves of the Republicans' tax cut law.

"Fifty-one percent say the tax cut law does not help financially," Dickerson said. "So, that doesn't seem like a very good record to run on. People don't seem to be buying it."

According to Ryan, the law is "overwhelmingly popular" when "you break it down into its component parts."

Dickerson also observed that the federal deficit had reached the highest level since the economic recession of 2008.

Ryan, however, ignored the deficit numbers and insisted that "higher revenues" were paying for the tax cut.

"When you take into account the revenue that would increase from population, revenues are lower than they should be," Dickerson said.

Ryan, again, repeated his claim that "revenues are higher."

Dickerson moved on to a question about rhetoric at Trump rallies, which he said appeared to "sow division in the country."

"Do you see that happening at his rallies?" the CBS host asked.

"Sometimes," Ryan admitted. "Not always, but sometimes. I worry about tribal identity politics becoming the new norm of how politics is waged. As conservatives, we always thought this was sort of a left-wing [Saul Alinsky] thing, Unfortunately, the right practices identity politics now as well."

"You've talked about inclusive politics that tries to unify," Dickerson pressed. "Does President Trump practice those kinds of politics?"

Dickerson paused and smiled as if to say that Ryan's claim was unbelievable.

"On tax reform, on economic growth, on helping the veterans," Ryan remarked, "those are things that he's led us to that have really brought people together."