FLASHBACK: The time Ted Cruz's father suggested his son is 'anointed' by God to bring about the 'end time transfer of wealth' 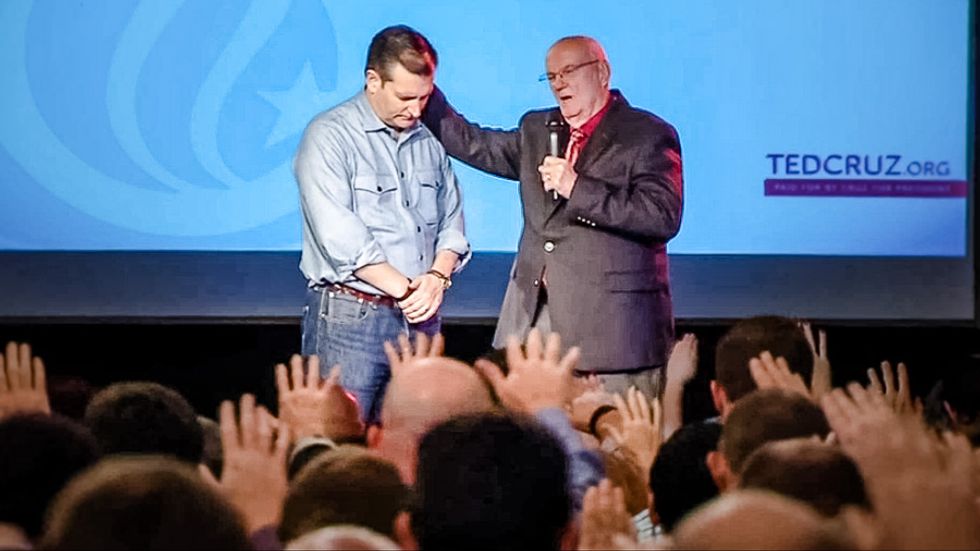 It may be history to some, but just six years ago, Sen. Ted Cruz's (R-TX) father gave a powerful sermon about his son that warned he was "anointed" by God to bring about the "end time transfer of wealth."

While it might sound like the holy version of a Goldman Sachs deal, Pastor Rafael Cruz used his Bible to tout the divine nature of his son during a sermon at New Beginnings Church in Irving, Texas with Pastor Larry Huch.

"The pastor [Huch] referred to Proverbs 13:22, a little while ago, which says that the wealth of the wicked is stored for the righteous. And it is through the kings, anointed to take dominion, that that transfer of wealth is going to occur," the elder Cruz said Aug. 26, 2012.

"The dominionist sermon received a lot of scrutiny, particularly on The Huffington Post commentary by Methodist Associate Pastor Morgan Guyton, who explained the nature of pastor Cruz's sermon. He noted it focused on the divine mandate for believers, with the anointing of "kings" in their world to take over control over all parts of society.

"Kings who are anointed to go to war, win the war, and bring the spoils of war to the priests," Cruz said.

Ted Cruz was later blessed and anointed by a group of famous dominionist pastors at a Marriott in Iowa, naming him a kind of "king" in the world of politics and government.

The younger Cruz has already worked to help send hundreds of millions of dollars to evangelicals in the right-wing.

"Cruz's past service - as a 'king' who brought 'spoils to the priests' - is a matter of established record; as I revealed in a prior story, no less than a top adviser to President George W. Bush has stated that in 1999 Ted Cruz played a major role in helping the Bush for President campaign lock down the conservative evangelical vote in the 2000 election," an Alternet assessment outlined.

Thanks to Cruz's work in getting George W. Bush to the White House, his "Faith-Based Initiative," forked over billions to churches and groups affiliated with the religious right.

"In other words, the 'great transfer of wealth' is about more than wishful thinking. It's about an ongoing effort, by leaders and institutions of the evangelical right, to gradually gobble up the secular sphere of government," the Alternet report continued.

"I know that's why God got Rafael's son elected - Ted Cruz, the next Senator. But here's the exciting thing - and that's why I know it's timely for him to teach this, and bring this anointing," said Pastor Larry Huch. "The rabbinical teaching is, especially amongst gentiles, who God opens their eyes, that in a few weeks begins that year 2012, and that this will begin what we call the "End Time Transfer of Wealth."

"And that when these gentiles begin to receive this blessing, they will never go back financially through the valley again. They will be grown and grow and grow," Huch continued. "It's said this way - that God is looking at the church, and everyone in it, and deciding, in the next 3 and 1/2 years, who will be his bankers. And the ones that say, "Here am I, Lord, you can trust me", we will become so blessed that we will usher in the coming of the Messiah. This message is for you. Would you welcome our good friend Rafael Cruz? What a tremendous man of God."

The elder Cruz had his own explanation.

Cruz then decided to run for president, lost the race and was labeled "Lyin' Ted" by the man who won. It's unclear if this too was meant to have been caused by God. Pastor Cruz hasn't clarified.

You can watch some of the sermons below: