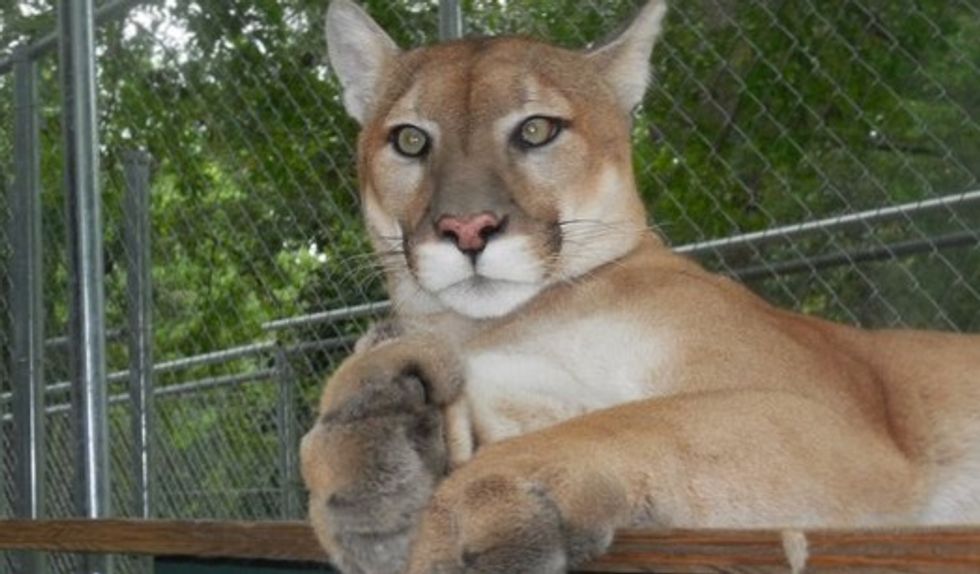 “Saint” the mountain lion was pacing nervously in his pen and crying days before Hurricane Michael cut a path of destruction through the Bear Creek Feline Center, a refuge for 23 wild cats near Florida’s Panama City.

“They were very agitated,” said Bertie Broaddus, who runs the center with her husband Jim Broaddus, as she inspected the damage from the powerful storm that killed at least 17 people and tore up Florida’s Panhandle coastline.

“If they’d been in the wild they instinctively would have moved on,” said Jim. “But when they’re in captivity they don’t have that option. So they hunker down, and then after it’s over, they’re agitated and traumatized just like the people.”

Bertie, a retired special education teacher, opened the center, about 15 miles north of downtown Panama City, with her husband in 2000. They live there and run the nonprofit with the help of a dozen volunteers.

As they inspected downed trees, a torn roof, collapsed garage and flattened fence around the perimeter, the couple’s main concern was how to care for the animals, whose daily food and medical costs are about $600.

The center is a TripAdvisor Panama City top attraction and tours help cover its costs, but the hurricane has driven away visitors and access to the butcher shop that supplies meat for the animals has been impeded.

On Wednesday night, as Hurricane Michael raged through the area, Bertie said that she and her husband repeatedly checked on the cats outside.

“If I could have I would have evacuated, but I couldn’t leave the animals,” she said. “We had to hunker down and make sure they were OK for the safety of the community.”

She said neighbors were justifiably concerned that some of the big cats might escape in the storm.

“We’re kind of worried about those cats getting out. There’s a lot of kids in this neighborhood,” said Jonathon Roeder, 33, who lives with his family in Cedar Wood Estates, about two miles from the Center.

Neighbors and agents from the Florida Fish and Wildlife Conservation Commission checked on the center after the storm.

“These cats can hurt people. You don’t know what they would do if they were out,” Bertie said, explaining that the mountain lions are large enough to be dangerous and have no fear of people because they never lived in the wild.

On Friday, the Center was without electricity, running water and telephone reception. The owners estimated that it has as much as $100,000 in damages and that it will take at least six months to restore it.

But what matters most to them is the animals; the mountain lions are still pacing anxiously in their cages, which is not their normal behavior.

“The big guys are pacing, which makes us cry,” Jim said.