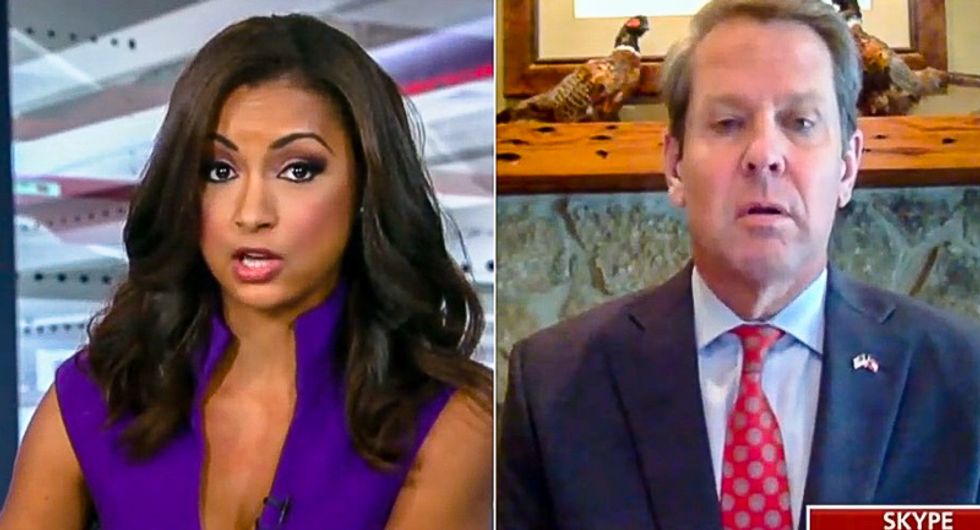 Fox News host Eboni Williams on Sunday grilled Georgia's current secretary of state, who is also running for governor, after his office wiped a half a million voters off the rolls.

Williams opened her Fox News interview with Secretary of State Brian Kemp (R) by noting that allegations of voter suppression had been made against his office.

"There are claims that voter suppression is alive and well in Georgia," Williams explained. "Are you suppressing the vote in Georgia?"

"Absolutely not," Kemp replied with a smile. "Look, this is the liberal left. They do this every two years."

Williams pointed out that Kemp's office had removed half a million voters from the voter rolls, which has been described as the largest voter purge in U.S. history.

"Well, it's true that we're following the law," Kemp insisted.

"Well, let's break that down," Williams interrupted. "I'm going to let you finish and you are definitely talking a lot here. I just want to ask you specifically about the way you can legally purge people off the rolls. So is it required, Mr. Kemp, that there be a good-faith belief that those individuals moved from the district or the county in order to purge them?"

"We are following the law," Kemp repeated.

"Is there a requirement for a good-faith belief that they moved?" Williams asked again.

"Ma'am, we're following the law," Kemp said. "These are people that have had no contact. No voting, no petitions signed."

"Is that a yes, Mr Kemp?" the Fox News host asked.

"If they moved, they are not in the right district," Kemp argued. "We are following the law. These processes were approved by the Obama Justice Department."

"I'm only asking if you if those people did move," Williams remarked. "Because it looks like it's been determined by several experts that, of those half a million that were purged, 340,134 had actually not moved at all."

"Who are your so-called experts?" Kemp shot back. "Because if it's the Brennan Center, they are in the tank with all these left-leaning groups."

Williams, however, explained that she was referring to a different group of experts.

"Ma'am, we are following federal law," Kemp said. "We have a duty to keep our rolls secure."

"I only wanted to know about these 340,134 voters that -- at least it's been claimed -- were wrongfully removed from the voter rolls," Williams pressed. "You're comment on that?"

"You got it right -- claimed," Kemp snapped. "We are following law. I took an oath to keep our rolls secure and to follow the laws of this state and this country. That's exactly what I'm doing."