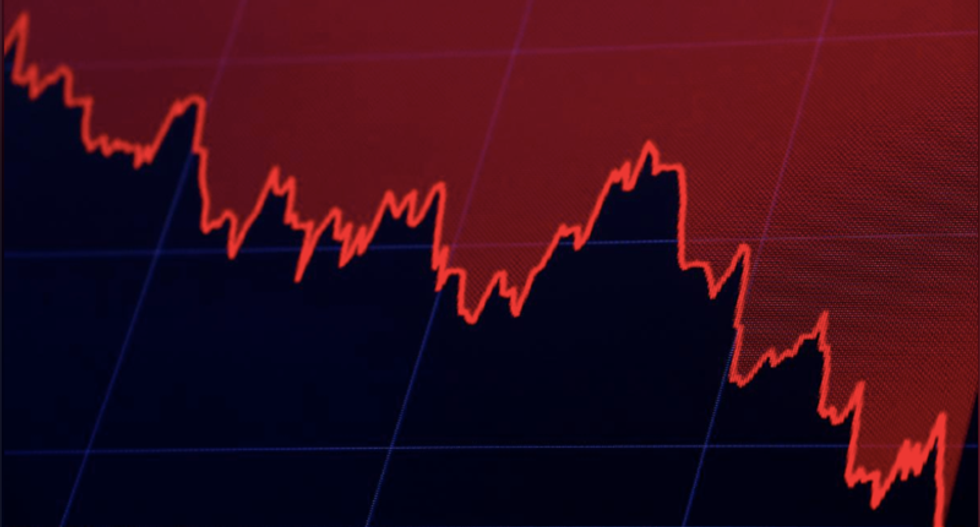 A screen displays a chart of the Dow Jones Industrial Average on the floor of the New York Stock Exchange (NYSE) in New York, U.S., October 24, 2018. REUTERS/Brendan McDermid

Asian shares dived on Thursday as hundreds of billions of dollars hemorrhaged from global markets after a rout in tech stocks inflicted the largest daily decline on Wall Street since 2011, wiping out all its gains for the year.

The dive in formerly high-flying U.S. tech stocks sent investors scampering to the safety of sovereign bonds, with yields in 10-year Treasuries US10YT=RR falling the most since May to 3.11 percent.

“Weak U.S. housing data, mixed corporate earnings results, trade war fears and concerns regarding a slowing global economy all contributed to the sell off,” Sydney-based Rivkin Securities said in a note to clients.

“Investor sentiment remains cautious as we anticipate the reports of over 100 S&P 500 companies including Amazon (AMZN.O), Alphabet (GOOGL.O) and Comcast (CMCSA.O).”

Weak readings on manufacturing in Europe added to angst over world growth, as did a surprise slump in U.S. home sales, which suggested rising mortgage rates were sapping demand for housing.

Adding to the air of tension, police intercepted suspected bombs mailed to former U.S. President Barack Obama, Hillary Clinton and other high-profile Democrats, as well as to CNN, in what New York officials branded an act of terrorism.

The growing international pressure on Saudi Arabia over the death of journalist Jamal Khashoggi also weighed on investor sentiment.

The Nasdaq .IXIC closed down 12.4 percent from its Aug. 29 record closing high, falling 4.4 percent for the day in its biggest one-day percentage decline since Aug. 18, 2011.

According to data analyzed by Reuters, the proportion of stocks, regions and sectors that are technically in a bear market has shot up since the start of January, prompting some analysts to conclude the bull run may already be over.

Citi has lowered its global growth forecast for both 2019 and 2020 by 0.1 percentage point each to 3.2 percent and 3 percent, respectively, it said in a note Thursday, citing policy tightening by the U.S. Federal Reserve.

“Over the next year, bouts of financial market turbulence are likely to worsen,” Citi economist Catherine Mann said, “as gaps between market expectations of policy rate hikes and the median dot plot close.”

In foreign exchange markets, client participation on both spot and options was fairly light, Citi noted in a separate note.

Funds flowed to the U.S. dollar and Treasuries and out of the euro and the British pound.

Against a basket of currencies, the dollar eased from near a nine-week peak to 96.267 .DXY. [USD/]

The yen got the usual safe-haven bid, with the euro skidding to a two-month low at 127.68 yen EURJPY=. Even the high-flying dollar eased to 112 yen JPY=.