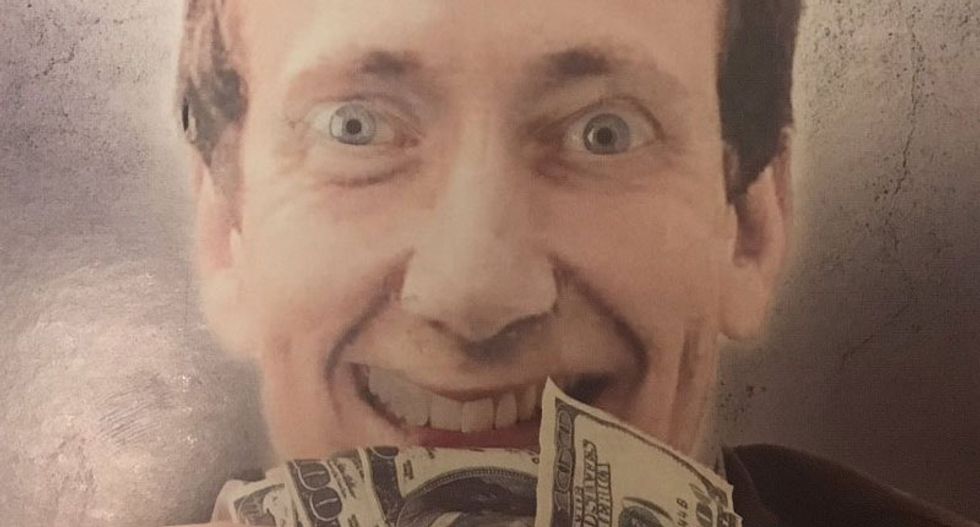 The Jewish campaign treasurer for a Republican candidate in Connecticut is defending a campaign mailer that depicts their Democratic Party opponent in what is being described as the "worst kind of anti-Semitism."

"The full-color, double-sided mailer shows an altered image of Democrat Matt Lesser, who is Jewish, with large, beady eyes, holding fistfuls of hundred-dollar bills. There’s also a lead tagline on the other side: “Matt Lesser will take everything you worked for.” It was mailed out to homes in and around Middletown -- the district where Lesser is trying to win a Senate seat," WNPR reported Tuesday. "It was sent by his Republican opponent Ed Charamut."

“A new line has been crossed,” said Rep. Lesser. “Two days after a horrific attack in Pittsburgh, the last thing we expected was to see something like this in Connecticut.”

"To be honest, I was shocked when I saw the mailer, I've never seen any quite like it," he added.

“His eyes were altered to look bigger and greedy,” Greenspan admitted.

Greenspan claimed he was unaware if Lesser's nose had also been altered.

“The juxtaposition of a Jewish candidate and money in this manner suggests an age-old anti-Semitic trope,” explained Steve Ginsburg, director of the Connecticut branch of the Anti-Defamation League.

The state Republican Party lashed out at those criticizing the campaign mailer.

“If you disagree with a Democrat, this is what they do -- they call you racist, sexist or bigot,” claimed GOP Chair JB Romano.

“Hateful rhetoric from the White House has emboldened racists, homophobes and anti-Semites to drop their dog whistles and express their bigotry clearly and openly,” Lamont told the Hartford Courant. “Those hateful words lead to violent acts. There aren’t ‘two sides’ to anti-Semitism, and there aren’t good people on ‘both sides’ of bigotry.”

This is the worst kind of antisemitism, and for it to show up just two days after the worst attack in history of Je… https://t.co/1tvhICb2JN
— Gabe Rosenberg (@Gabe Rosenberg) 1540910305.0