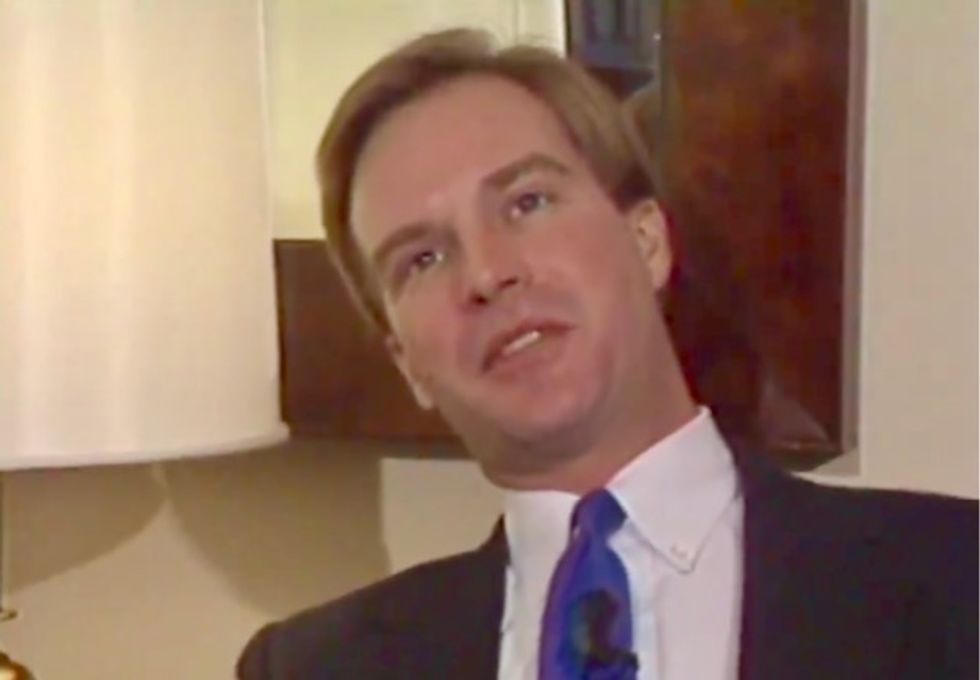 Michigan's Attorney General and the Republican nominee to become his state's governor says he doesn't remember appearing in a 1989 video clip that resurfaced Thursday.

Bill Schuette insists that what is being called "creepy as hell" behavior was just a "poor attempt" at humor.

In the video, which apparently is an outtake from an interview in which a camerawoman or producer asks him to move closer to a lamp, Schuette responded saying, "I will do anything you want. Some things I may not let you run the camera on, but I will certainly happily."

Schuette was 35 and a U.S. Congressman at the time he made his apparently misogynistic remarks.

"That apparently was my poor attempt to be humorous 30 years ago," Schuette said in a statement to The Detroit Free Press.

"The video, which appears to be edited with only one short portion shown, has been in the public domain for some time. It’s fortunate for me that Cynthia came into my life and let me know that I am not a very funny guy, but this is no less embarrassing to me today and I regret it."

His regret appears to be insufficient to some.

EARLIER: ‘I THINK I NEED A SHOWER’: INTERNET TOTALLY GROSSED OUT OVER THIS ‘CREEPY’ VIDEO OF GOP ATTORNEY GENERAL

"A spokeswoman for Planned Parenthood's political action committee said the remarks, directed at a female TV camerawoman, are an example of the 'creepy behavior' working women have to put up with all the time," the Detroit Free Press added.

Lori Carpentier, of the Planned Parenthood Advocates of Michigan PAC, issued a statement Thursday that said: “Every day, women go to work and try to do their jobs while dealing with creepy behavior like this. It wasn’t funny then. It’s not funny now.”

Former Senate Minority Leader Gretchen Whitmer, Schuette's Democratic opponent, said she imagines "everyone who’s watched it had the same uncomfortable look on our faces." She said it's more troubling that Schuette has spent his political career "attacking the rights of women and working to take away our access to contraception and health care."

Not only has Schuette been attacking the rights of women, he has been at the center of attempts to quash marriage equality for years.

As NCRM reported Thursday, this past July Schuette, in his official capacity as Attorney General, claimed Michigan's civil rights laws do not ban anti-LGBT discrimination.

In 2015 Schuette had to be ordered by a federal court to legally recognize the marriages of more than 300 same-sex couples which had been legally performed in the state, after having claimed they "never existed." He previously had announced their marital rights were "suspended."

And maybe even worse, one year earlier, Attorney General Schuette in a case against same-sex marriage put on the stand a witness who told the court gay people are going to hell.

GUESS HOW MUCH FIGHTING SAME-SEX MARRIAGE JUST COST THE STATE OF MICHIGAN?