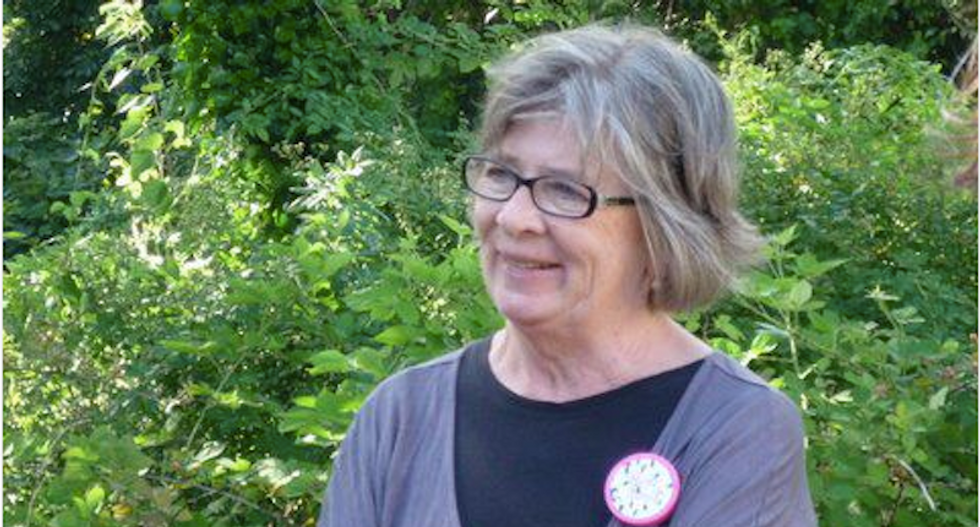 For decades, award-winning investigative journalist Barbara Ehrenreich has promoted progressive causes, using her tireless reporting to lobby for a more just and equitable society. She’s gone undercover, most famously for an article that later became the book “Nickel and Dimed” which chronicled her experience working back-breaking jobs that paid their female workers scraps, even in the allegedly flush Clinton years.

Post 2008-financial crisis, Ehrenreich has taken on such classic American ideologies as forced optimism in “Bright-sided: How the Relentless Promotion of Positive Thinking Has Undermined America.”

Most recently, in her book "Natural Causes: An Epidemic of Wellness, the Certainty of Dying, and Killing Ourselves to Live Longer," she punctures Americans’ obsession with wellness trends and fitness culture.

As head of the Economic Hardship Reporting Project, Ehrenreich also promotes class and race diversity in journalism by working with people who lack traditional journalistic backgrounds and platforms—but that we nevertheless need to hear from.

Raw Story spoke with Ehrenreich on the phone about the rise of the young socialists, feminism, the vulnerability of immigrants in Trump’s America, #MeToo, and why protestors should throw giant keggers outside of the Supreme Court.

A transcript edited for clarity below.

Tana Ganeva: So, first an “easy” question. It seems like people are still relitigating the 2016 election. For example, as when it was announced the Clintons are expected to go on tour in 2018 and 2019. What do you think about the Clintons’ role in public life?

Barbara Ehrenreich: I don't know... it doesn't seem right. I don't think they should be putting themselves forward in this way. There's a deep divide within party and they represent one part of that and it seems like they're trying to use their celebrity for advantage. Maybe that's not a bad thing. It does seem very odd to see when I read that right now. There are ways in which people get addicted to the spotlight and that seems to have happened to Clinton.

TG: Can you talk about some of the newer candidates who have really impressed you and what, if any, threads connect them?

Ehrenreich: How they appeal to me is one thing. They come right out and say what they mean, they just roll the dice. Like Medicare for all ... they don't do the thing the Clintons did, where the debate started from the middle and then went to the right. It seems more sensible to start with what you really want, and if you need to negotiate, you go from there.

Now there are democrats who will say, ‘But this is suicide.’ These socialists, that they want drastic things. Well, we've been hearing that for a long, long time. That hasn’t worked. But I think democrats are divided and some of us want to just go for what we really believe.

It's an amazing change if you think about it. I've been a democratic socialist for like 40 years or something. You know it kind of was a conversation stopper for a lot of that time. You couldn’t say that. And now, you know, that's all changed. Which means we can begin to have a discussion we couldn't have had before.

And I’m not imagining that people like Alexandria Ocasio-Cortez want to immediately transfer everything into the public sector. That would be disruptive and we've gotta figure this out. But they are opening up a discussion about private control of things that our lives depend on, like health care.

I had this conversation with a taxi driver not so long ago, when he just said "It's a disaster. Now democrats want to be socialists and that’s going to ruin everything.

He basically said, "How could we afford any of the things, like raising wages or Medicare for All? Where will the money come from?’ And I said, “That’s easy! It has to come from the rich!"

In America there’s a fantastic buildup of wealth like the world has never seen. There's also the military and other things one could reasonably talk about greatly reducing. But it never occurred to him that there was all that wealth sitting around.

My problem with inequality is not that it's unfair, it's that it's impossible and unbearable for the rest of us. For example, think about the cost of housing. The rich can afford everything. We're being ground down by super concentrations of wealth.

People are leaving the country. I hear a lot about that. There’s a young woman who's been trying to stay afloat adjunct teaching and doing factory work. She’s talking about moving to China and getting some kind of ESL type job.

TG: So you Tom Friedmanned a cab driver?

Ehrenreich: Haha yes. Perhaps I shouldn't have done that. But it was interesting, that conversation. I swayed him a little bit, maybe.

TG: To switch gears, it seems like a lot of the narratives and counternarrative backlash against the #Metoo era seems like, women are told that they're going to be victimized. Yet, how do you square that with pushing women to do brave things, like for example the undercover work you’ve done?

Ehrenreich: I don’t see a contradiction at all. I've been thinking of this in sweeping historical terms and about the rise of patriarchy about 7 thousand years ago (in different places of course).

There's a very close connection between slavery as an institution and male domination and this goes back thousands of years.

We have been victimized terribly. And yet we have to act as bravely as we can to end that.

I just get irritated when people start competing about whose victimization is greater.

Like, it was kind of common after Trump's election when some white feminists started saying we are the real victims, without noticing the real victims were the immigrants. I have to be clear that ... perhaps Kavanaugh’s nomination may have evened the score on that a little bit, but the people who are in immediately suffering are immigrants. So they have the great moral claim on us.

Ehrenreich: How old are you?

Ehrenreich: So it’s your turn to answer that question. Don't turn to an old person like me! I mean this …. your generation needs to study things. We tried and in some ways succeeded, in others we failed, but the torch is passing right now. I'm very serious about that.

Or maybe I'm just covering up for the fact that I don't have a clear answer. My answers are not often what’s deemed productive. I think we should do everything possible to hasten the loss of respect toward the Supreme Court. Let’s have huge keggers outside the court. People should wear black robes with Supreme Court justice on them. There’s no respect for the institution now. Never felt too extremely one way on another about it.

Now it's a joke and the thing we have to do is avoid strategies that depend on the judiciary.

Ehrenreich: Because with the Supreme Court we're going to lose, because of the way it's weighted now.

TG: A lot of the activism you're done around journalism is to bring more diverse people into the industry, especially to promote class diversity. Are you feeling good or bad about how that's played out in the past say decade?

Ehrenreich: Well I feel very good about what we're doing at Economic Hardship Reporting Project we are really out there, we're getting stories from exactly the kind of epode we want to hear from. People who aren't writers or photographers professionally but who are seeing economic hardship in their lives and this is wonderful.

The change from when I was your age is so depressing because I could make a living as a freelance writer in the 80s. I had children to support, it meant working very, very hard. But that was almost doable.

TG: I know you're generally not a fan of optimism, but is there anything to be optimistic about?

Ehrenreich: Well I'm very optimistic about things like the amazing growth of DSA. And about the appearance of these wonderful candidates, some of whom we mentioned. Those are cause for optimism.

TG: Cool, are you off to go to a kegger outside of the Supreme Court?

Ehrenreich: Ha, yes, that’s the plan. But I don’t know where you'd get a keg.