'I'm president and you're not': Trump's '60 Minutes' interview goes off the rails when Stahl demands answers on immigration and Dr. Ford 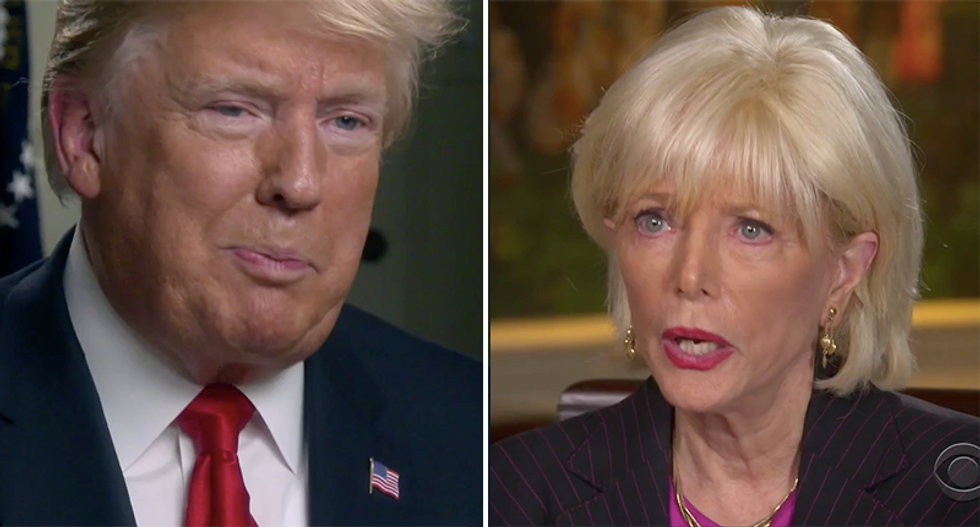 When it came to questions about immigration and President Donald Trump's policy to take children away from their parents, the president swore, inaccurately, that President Barack Obama did the same thing.

In a "60 Minutes" interview, reporter Lesley Stahl asked him what he regretted. He started off on a rant about how he regrets the press treating him unfairly. She clarified she wanted to know if he made any mistakes, and all he would say is that he wished he'd done NAFTA sooner.

Stahl pressed Trump about the zero tolerance police that led to thousands of children being separated from their families.

"Can you answer yes or no," Stahl asked for the third time about reinstituting the executive order.

"There have to be consequences for coming into a country illegally," Trump said.

When asked about what he's learned from his presidency, Trump called Manhattan real estate people "babies" compared to political people.

"It's the most deceptive, vicious world. It's vicious. It's full of lies, deceit and deception," he said. "You make a deal you might as well be making a deal with that table."

"Give me an example," she asked.

"Well, I don't want to give you an example -- remember nobody's been able to do what I do," Trump said. "When you look at taxes, when you look at regulation when you look at making deals with other countries -- nobody's been able to do something like this. Actually, most people didn't even try because they didn't have the ability to do it. But it's a very deceptive world. The other thing I've really learned is I never knew how dishonest the media was. I really mean it. I'm not saying that to soundbite, I never know how --"

"I'm going to change the subject again," Stahl moved on.

"No, but even the way you ask me a question like about family separation, I say Obama did it you don't want to talk about it," Trump said. Obama never took children from their families at the border and put them in cages.

"I'm going to run your answer, but you did it four times," Stahl said about Trump avoiding answering her question.

"I'm just telling you that you treated much differently on the subject," Trump said.

They also addressed the way in which the country has been pulled apart by the confirmation hearing of Supreme Court Justice Brett Kavanaugh.

"I don't think they want to heal. I want to heal," Trump said about Americans wanting to come together after being torn apart.

When it came to Dr. Christine Blasey Ford, Trump said he didn't mimic her or make fun of her. He claimed he was really just calling into question what she didn't remember.

"Had I not made that speech, we would not have won," Trump said. "I was just saying she didn't seem to know anything and you tried to destroy the life of a man who has been extraordinary."

Trump's speech was factually inaccurate, Dr. Ford did have a lot of information, described the house in such great detail that reporters were able to locate the house the assault likely occurred in and which friend of Kavanaugh's lived there at the time. The date was uncovered by using the calendar Kavanaugh released showing July 1 was likely when the party she referenced took place.

"Why did you have to make fun of her?" Stahl asked.

"I didn't really make fun of her," Trump said.

Stahl said that when speaking at the hearing, one thing Dr. Ford remembered the worst moment was that the two men were laughing at her.

"And then I watched you mimic her and thousands of people were laughing at her," Stahl explained.

"They can do what they -- I will tell you this," Trump said. "The way now Justice Kavanaugh was treated has become a big factor in the midterms."

"I think she was treated with great respect," Trump said about the Senate hearing. "There are those who think she shouldn't have been."

"But do you think you treated her with great respect?" Stahl asked.