‘I’m not a baby. I know’: Donald Trump snaps before admitting to ’60 Minutes’ he doesn't know if North Korea is closing nuclear sites 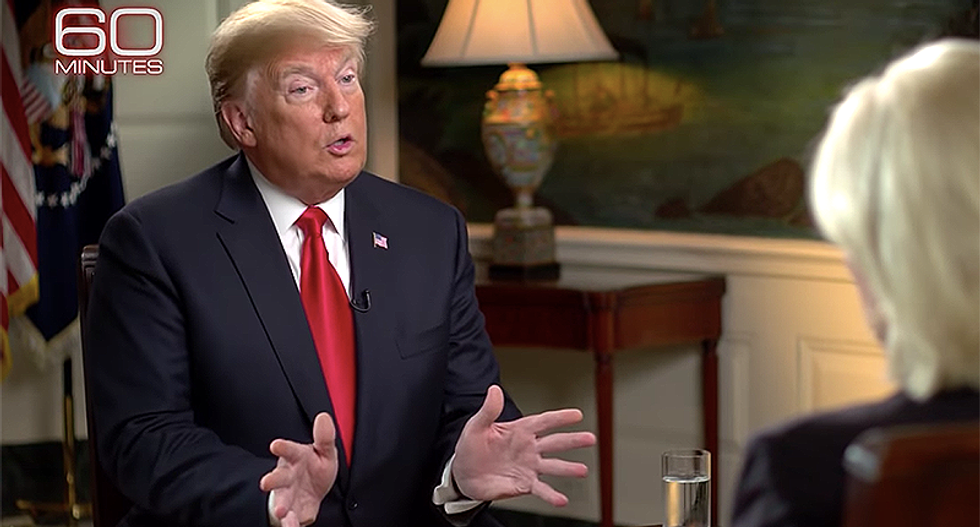 President Donald Trump has continued his campaign for Republican candidates across the country, but he went to CBS's "60 Minutes" to tout his message and make excuses for why he hasn't accomplished his campaign promises.

In a discussion with CBS journalist Lesley Stahl, Trump promised his White House isn't filled with chaos as he blows through a record number of staffers. Sources have reported that chief-of-staff John Kelly doesn't want to stick with the administration, but Trump swore it was "fake news." The same is said for Gen. James Mattis.

He explained he is "entitled" to hire and fire whomever he wishes.

"I'm changing things around. And I'm entitled to. I have people now on standby that will be phenomenal. They'll come into the administration, they'll be phenomenal," the president claimed.

When it comes to the missing journalist, Jamal Khashoggi, Trump said he's fearful to act against Saudi Arabia because of "jobs." He's said that he intends to call the Saudi King Sunday evening. The King has nothing to do with the things being discussed, rather, it's the Saudi Prince that was frustrated by Khashoggi's coverage. Aide Jared Kushner called the prince, who denied the government was involved.

Khashoggi writes for the Washington Post, which Trump has been at war with since taking office. Trump told Stahl that she'd probably find it shocking but there's something "really terrible and disgusting" if it's the case that the Saudis did something to him.

While walking with Stahl, Trump addressed the Russia investigation, asking if she "really" thinks he asked Russia to fix the election for him. "How stupid would I be?" he asked instead of answering the question.

He said that he refuses to make any promises about Robert Mueller's investigation, but he has no intention of firing Mueller.

He also noted that he used to refer to the real estate world as the worst and most deceptive industry, but after dealing with politics, he thinks they're "babies."

When it comes to the huge hurricanes that have been taking down parts of the United States, Trump says it's unclear if climate change matters or not. He claimed that the scientists who advocate for action on climate change "have an agenda" and he doesn't necessarily deny climate science but he doesn't want to give trillions of dollars away and lose jobs.

When Stahl talked about mountainous chunks of ice falling into the ocean, Trump said no one knows if that would have happened with or without global climate change. Scientists have given information on that, however.

"I'm not denying climate change, but it could very well go back," Trump claimed.

When it came to North Korea, Stahl asked Trump if it is true "they haven't gotten rid of a single weapon and they're building more."

Trump said "no one really knows" whether North Korea is closing up sites or not and that "people are saying that." The president gets a daily security briefing that should give him that information, but he often skips those briefings. He claimed that the North Koreans haven't shot off a missile or a rocket and haven't been testing nuclear weapons. The last time North Korea launched a ballistic missile was on Nov. 28 from the vicinity of Pyongsong.

"We were going to war," Trump said about his first year in office. He said that he believes the U.S. was headed that way with North Korea, so he came out stronger than any president in history and changed the narrative. "Now you don't hear talk of it. He doesn't want to go to war. We don't want to go to war."

Stahl was baffled by the friendship the two men shared.

“He presides over a cruel kingdom of repression, gulags, starvation. Reports that he had his half-brother assassinated. Slave labor. Public executions. This is a guy you love?” she asked.

“I’m not a baby. I know these things,” Trump snapped. He went on to say that he trusts Kim Jong-Un because, "a deal is a deal." He said that the claim he "loves" the guy is nothing more than a figure of speech but that they get along well and they have good energy and good chemestry. "Look, no more threats. No more threats."

Watch clips from "60 Minutes" below: