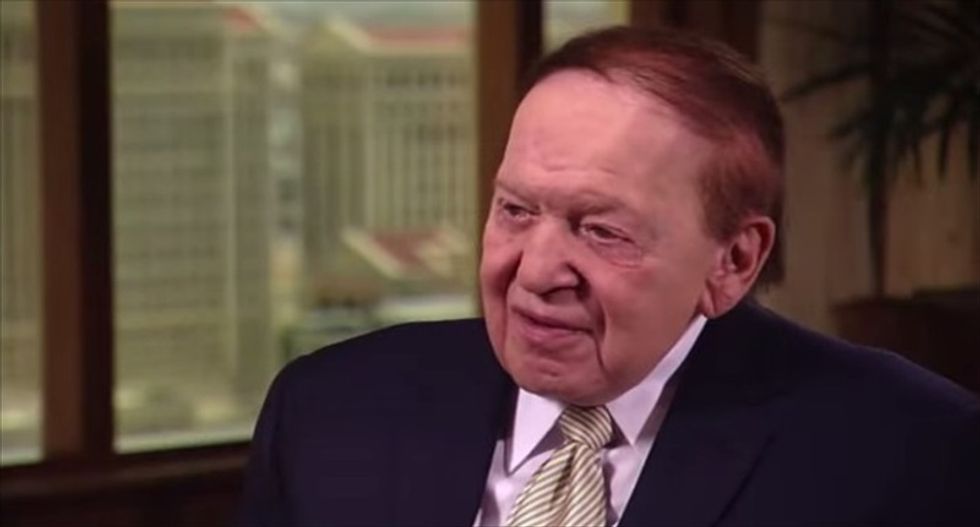 Days after a gunman slaughtered 11 people at a Pittsburgh synagogue—while screaming anti-Semitic slurs—President Donald Trump once again blamed the media for political violence and called them "the true enemy of the people" on Twitter.

The President's response raised concerns that his rhetoric, aimed at the media and vulnerable groups like refugees and immigrants, creates a climate of hate that might encourage spillover into real world violence, such as Cesar Sayoc's alleged mailing of pipe bombs to public figures critical of President Trump and Richard Bower's synagogue attack.

Israel Hayom, an Israeli paper heavily funded by Sheldon Adelson, owned by one of his relatives, and published by his wife, Miriam, does not appear to agree. The publication's lead story Monday contends that "Accusing Trump of fostering violence is incitement."

The article goes on to suggest that holding Trump accountable for creating an environment that empowers hate-filled extremists in itself might incite violence.

"A hate crime is a despicable thing. That is why accusing someone of being responsible for a hate crime (like saying U.S. President Donald Trump may not have been the shooter, but he created an atmosphere that was conducive to the shooting) is a very serious thing," the article claims. "In fact, it is incitement."

The author goes on to knock critics of the President who suggest he might hold some responsibility for the killings.

"The bodies strewn across the floor of the Tree of Life Synagogue in Pittsburgh's Squirrel Hill neighborhood were still warm when my colleagues here in Israel began to suggest that this heinous murder, committed by the vile neo-Nazi Robert Bowers, was carried out under the auspices of Trump. Revolting," they note.

The article also credits Trump for his support of Israel, which many critics note is at odds with the ideals of progressive Jews in the US. Nevertheless, the paper uses Trump's support of Israeli Prime Minister Benjamin Netanyahu as evidence that he couldn't possible facilitate an atmosphere where vulnerable groups might be under threat.

'Trump is the most pro-Israel American president in history. He has a Jewish daughter and Jewish grandchildren. And yet, he still needs to prove himself over and over again. Trump feels the pain of the Pittsburgh community," they write. 'After the massacre, Trump said, "It's a terrible, terrible thing what's going on with hate in our country, frankly, and all over the world, and something has to be done.'"

The piece ends with a call for the return to "common decency."

"We should unite, not incite, in the face of a hate crime. But it appears that is too much to ask in these crazy times, in which social media has taken the place of traditional media outlets and allegiance to a particular political camp takes precedence over common decency."

Sheldon Adelson is an ardent Trump supporter. He also has financial ties to Donald Trump going back decades, that Adelson may have used to buy political influence in the White House. A recent ProPublica story chronicling the mens' close relationship deemed Adelson's Trump's "Patron in Chief."