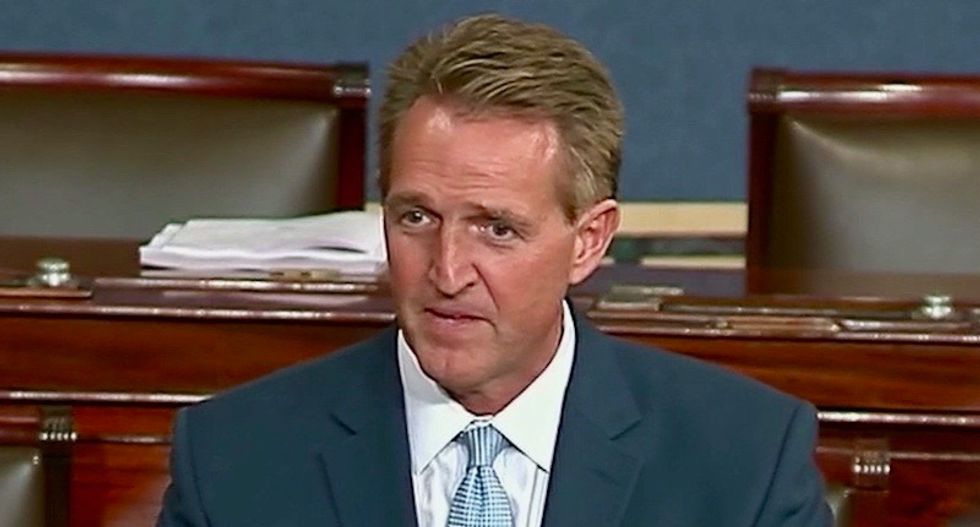 Sen. Jeff Flake (R-AZ) speaks on the floor of the Senate/Screenshot

On Wednesday, Sen. Jeff Flake (R-AZ) said that "all sides" were to blame after prominent Democrats received bomb threats.

While interviewing with CNN's Chris Cuomo, Flake said that President Donald Trump should stop referring to the press as the "enemy of the people."

"The overheated rhetoric has gone too far. We’ve seen it for [the past] couple of years. Those of us who were on that ball field where somebody had the list of Republicans in his pocket that he wanted to target. We’re seeing it here where people on the other side of the spectrum are being targeted. We’ve seen it on all sides and everyone needs to cool it down," Flake said.

He added, "Words matter, particularly when they're spoken by those at the top of government. What the president says matters. If he were to take a more civil tone, it would make a difference. It would help."

"We [should] treat our opponents as political opponents rather than enemies, that will make a difference. The president shouldn't refer to the press as the enemy of the people," he said.

The attacks on "critical race theory" over these last nine months have sought to silence any critical focus on racism today, on structures, institutions, systems, acts and people deemed racist, and to reshape historical memory regarding race to this end.

Christopher Rufo has become the poster boy for these attacks, their driving force. He wasn't the only one, or even the initially intended operative to lead the charge. The Heritage Foundation promoted the initiative, with numerous of its agents — or agents provocateurs — assuming the task. Jonathan Butcher and Mike Gonzalez were the other two designated with Rufo for the work. Gonzalez published a book, "The Plot to Change America," targeting identity politics, centering terms Rufo would later mobilize to attack CRT.