Jeff Flake plays down Kavanaugh's lies about drinking in exchange with CNN reporter: 'Exaggerating your success or failures is something a lot of people do' 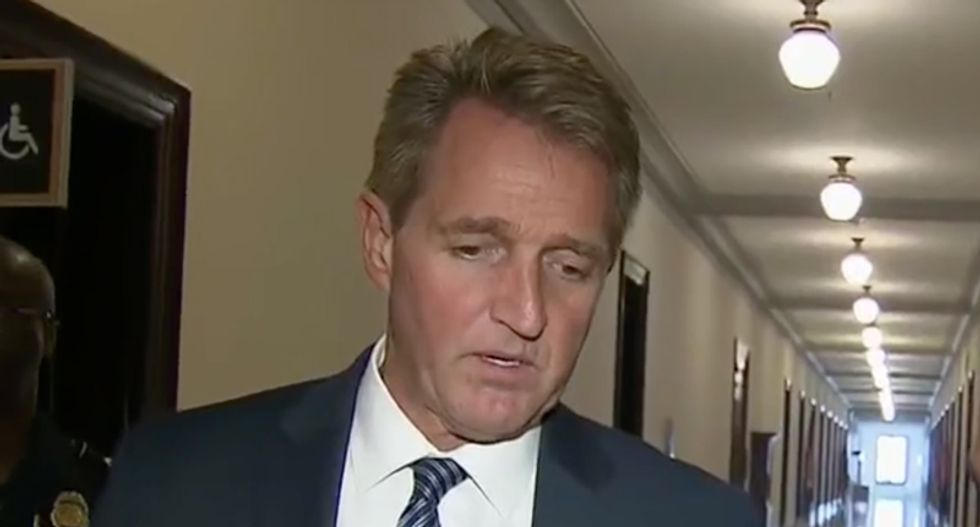 Arizona Senator Jeff Flake played down embattled Supreme Court nominee Brett Kavanaugh's demonstrable untruths about his drinking habits in an exchange with CNN reporter Manu Raju, saying no one is honest about their high school years.

"You said that if there are demonstrable falsehoods and lies, that would be disqualifying," said Raju. "There have been instances where it appears [Kavanaugh] was not fully forthcoming with the Senate Judiciary Committee about his past, his antics during college. Does that bother you?" Numerous friends and former classmates have undermined Kavanaugh's claims of sobriety, saying he was often out of control, incoherent and violent because of his drinking.

"I don't know specifically what you are talking about," said Flake, trying to sidestep the question before diminishing it. "If everybody, you know, accurately portrayed their high school years, you know, I'd say I gained more yards than I really did in football, you know."

"But he was under oath," responded Raju, but Flake cut him off.

"Maybe so, but the drinking thing, I don't know how to gauge that," said Flake. "How many would admit to drinking in excess when they really haven't? That is a different world from what I grew up in."

"I've said all along, you know, if somebody lies under oath, that that's not something that we can deal with," Flake added. But he was careful to leave himself wiggle room, saying "exaggerating or diminishing your success or your failures, that is something that a lot of people are used to."