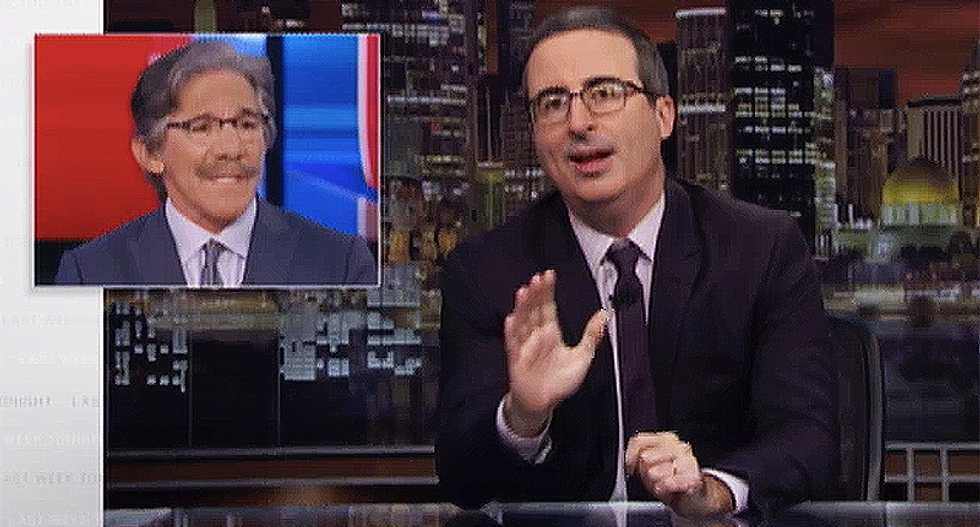 HBO host John Oliver at this point seems to do a near-weekly takedown of stupidity that appears on Fox News. This week was particularly egregious as the network let their conspiracy theories fly as they tried to explain away why a supporter of President Donald Trump would send bombs to Democratic presidents and other elected officials.

Geraldo Rivera was just one of many flinging nonsenses remarkably similar to what primates fling at a zoo.

"It has been a time of sober reflection," Oliver noted. "Or, if you're Fox News discussing those package bombs, a time for while speculation. Before the suspect was even arrested they were giving air time to a truly ludicrous theory."

He played clips of the many times that the right-wing claimed that the bombs didn't really exist and it was a "false flag," meaning a fake event created by the government.

"At the risk of sounding like a far-right-wing lunatic," began Rivera. "I'd have to say that I believe that this whole thing was an elaborate hoax."

"Yeah, but here's the thing about that," Oliver began his rebuttal. "Sounding like a far-right-wing lunatic is not really a risk for the Fox News brand, is it? It's more of a guarantee. It'd be like if Tony Bennett began every song with, 'At the risk of making your grandma wet.' What are you talking about, Tony? We all know that's going to happen. It's specifically what you're here to do."

The suspect was eventually found and it became more than clear that every word that came out of Trump's mouth was gospel according to the bomber. Thus, Rivera tweeted out his inevitable moment of shame. Though, somehow, he managed to screw that up too.

"Can I just say, 'outsmarted myself' is a brilliant way to admit that you did something incredibly stupid," Oliver said. "Wow, I really outsmarted myself this morning when I ate kitty litter right out of the litter box."

The network has yet to issue an apology or admit that they were wrong and Trump supporters still believe that it is all a lie. One told a reporter that he believes that the Democrats probably did it to themselves.

"OK, so Obama flew to Florida, mailed a bomb to himself in Washington, then flew back just in time to avoid it all to frame this guy," Oliver said exploring the conspiracy theory. "Now, I'm not saying that man's theory doesn't have any holes in it, but at least we can all agree he really outsmarted Geraldo."