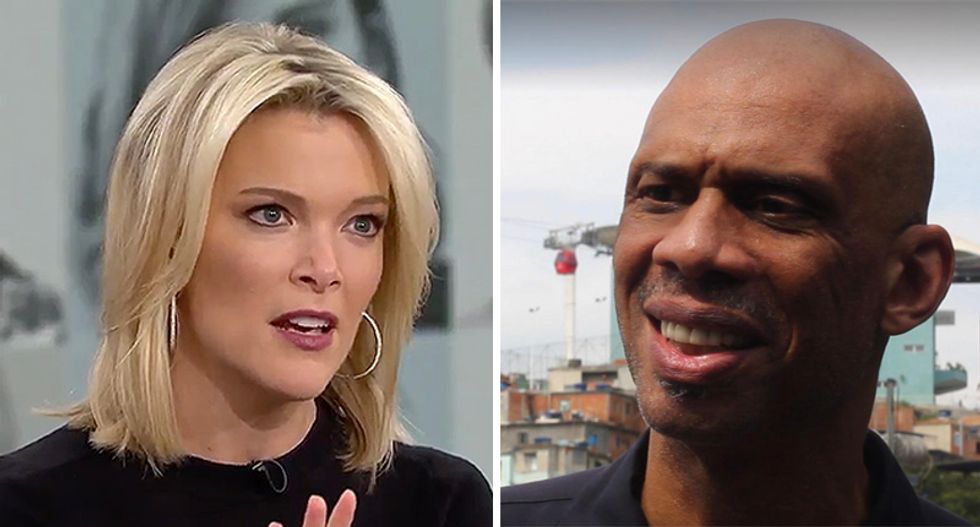 Writing for the Hollywood Reporter, former NBA great Kareem Abdul-Jabbar took the executives at NBC to task for the failed experiment to make over conservative Fox News personality Megyn Kelly into a mainstream NBC host on the Today show.

According to the former NBA star turned political commentator, there is no excuse for Kelly's comments saying dressing up in blackface was perfectly acceptable when she was growing up.

"What she says matters because it enters the social unconscious as a splinter that festers to an infection in our cultural values," Abdul-Jabbar wrote. "Kelly’s doe-eyed defense of wearing blackface for Halloween as not being racist is classic: 'What is racist? When I was a kid, that was ok, as long as you were dressing up as, like, a character.'"

"For a popular public figure with a law degree, she really is way too comfortable ignoring simple logic," he continued. "Her statement is the common logical fallacy of 'appeal to tradition' that suggests that because something happened in the past, it’s good, true, or beneficial. Like bleeding people when they’re sick, or women not voting, or slavery. Nostalgia is not an excuse for promoting bad behavior. If it were, we wouldn’t have made marital rape illegal—which we didn’t start to do in the U.S. until the mid-1970s (with it being illegal in the entire country by 1993)."

He then singled out NBC for hiring her despite her well-known history of making the type of inflammatory comments that conservative network thrives on.

"In Megyn Kelly’s case, it would be difficult to sustain an argument that she was ignorant of the blackface controversy," he wrote. "Either she deliberately was racist in order to juice her flagging ratings, or she was too dumb to know it was racist, which is inexcusable for a newsperson. Either reason is grounds for dismissal."

"This is not the best of all possible worlds and NBC might have sent her a mixed message when hiring her," Abdul-Jabbar suggested. "Kelly made consistently racist statements while at Fox News, so when NBC hired her in 2017, its executives were saying: We’re rewarding your racism on Fox by paying you $69 million over three years."

"Then when she does the same thing that got her that mega-payday, NBC suddenly expresses socially conscious outrage," he claimed, before adding a final condemnation.

"Not quite racist, but racist-adjacent. Firing Kelly does not wash away everyone’s past sins, but it’s still a cleansing moment."

You can read the epic takedown here.