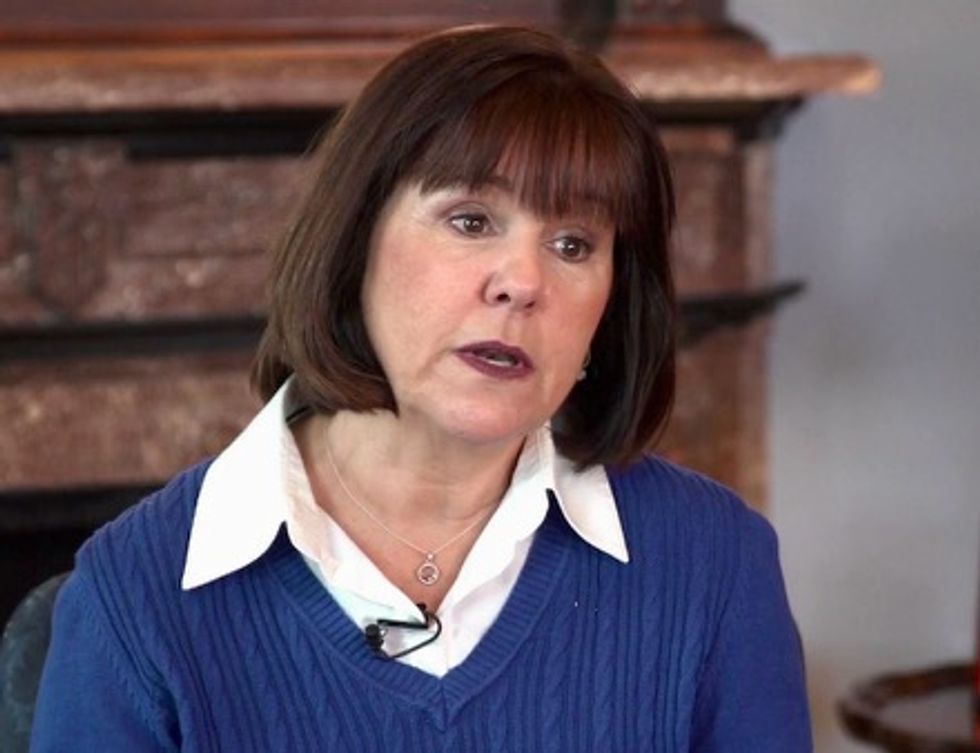 Karen Pence was seemingly brought in to help Harris deal with fallout from recent controversy over comments Harris had made about women, such as emphasizing Bible verses requiring women to submit to their husbands and questioning whether women having careers is “healthy” for society. WFAE reported that “Pence came to Charlotte as the guest of the Women for Mark Harris Bus Tour,” which kicked off at the University of North Carolina’s Charlotte campus on Monday morning.

“I’m here because this race is so important,” Pence said at the rally, emphasizing Harris’s support for President Trump’s agenda. “The road to the majority leads right through North Carolina. This seat, this race, it is critical to keeping the majority in Congress.”

Harris is a member of the Family Research Council’s “Watchmen on the Wall” network who wants to push his extreme opposition to abortion rights and LGBT equality into law. One of his “staunchest supporters,” according to the Christian Broadcasting Network, is Christian nationalist David Lane, who has made it a priority to recruit conservative evangelical pastors to run for office.

As we noted after his primary win:

Not surprisingly, Harris has a track record of opposing LGBTQ equality and abortion rights. Harris was an ally of the anti-LGBTQ Benham brothers in opposition to a Charlotte nondiscrimination law, and he was a driving force behind the campaign that put a ban on same-sex couples getting married into the state constitution; his First Baptist Church contributed more than $50,000 to the campaign. Harris, who says being gay is “a choice,” has said the anti-equality amendment was not about discrimination but about “standing up for the values and principles that have been a part of the fabric of American society.”

… He has praised new state-level restrictions on abortion and called for conservative Supreme Court justices who will revisit Roe v Wade so that the law can recognize that “life begins with conception” and  extend legal protections to the “unborn.”

In August, Media Matters unearthed video of Harris bemoaning, “We have watched in one generation where homosexuality was once criminalized to now we see the criminalization of Christianity.”

Media Matters has also reported on Harris’s Islamophobia, including his signing of a statement that falsely claimed that “all terror groups … have 100% Muslim membership” and asserted that “terrorist entities are not aberrations of Islam, they are the very essence of it.”

“We need good men like Mark Harris in Congress to keep the country moving ahead,” said Pence.

Just before she spoke at the rally, Pence did a brief interview with anti-LGBTQ personality Elizabeth Johnston—aka Activist Mommy. Johnston asked if “the pro-life issue” was a motivating factor for Pence to campaign for Harris.  “Absolutely,” said Pence, saying that she and her husband told their children the first time he ran for Congress the told their children, “We’re running to save the babies.”

Johnston followed up with her own declaration to the camera, saying, “I am here today because Mark Harris looked me in the eye, and he assured me that he wanted to see an end to the bloodshed, an end to the murder of babies through abortion, and he said, ‘No exceptions.’ And I said, ‘That is a man I can get behind.’

Among the other rally speakers was academic-turned-Religious Right activist Carol Swain, who said she believed Harris would fight for “the values and principles that made our nation great.” Swain said that Christians “have an obligation to Christ,” adding, “And I believe that God is doing a new thing in this nation, and that He’s raising up godly men and women to serve in office, men and women, and Mark has answered the call.”

“It is a God mission that we are on,” said Christian TV host Donica Hudson. “Mark Harris operates through the only worldview that I personally will ever vote for,” she declared, saying that worldview is based on love and unity, “the sanctity of human life,” and “the value of biblical traditional marriage,” and “parental rights.” She also praised Harris for being a “constitutionalist.”

Tami Fitzgerald of the North Carolina Values Coalition announced the group’s endorsement for Harris. “Mark Harris supports raising children in families with a mom and a dad,” she said, declaring that there are “no family values” in the Democratic Party platform.

Debbie Meadows, wife of Rep. Mark Meadows, chair of the right-wing Freedom Caucus, said Harris has a “spine of steel” and won’t be like one of the people who “fold like a cheap suit” when they get to Washington. Said Meadows, “Mark Harris will be the same man in Washington that he has been for decades here in the Charlotte area.”