Kellyanne Conway: Trump and White House staffers are the victims in synagogue massacre 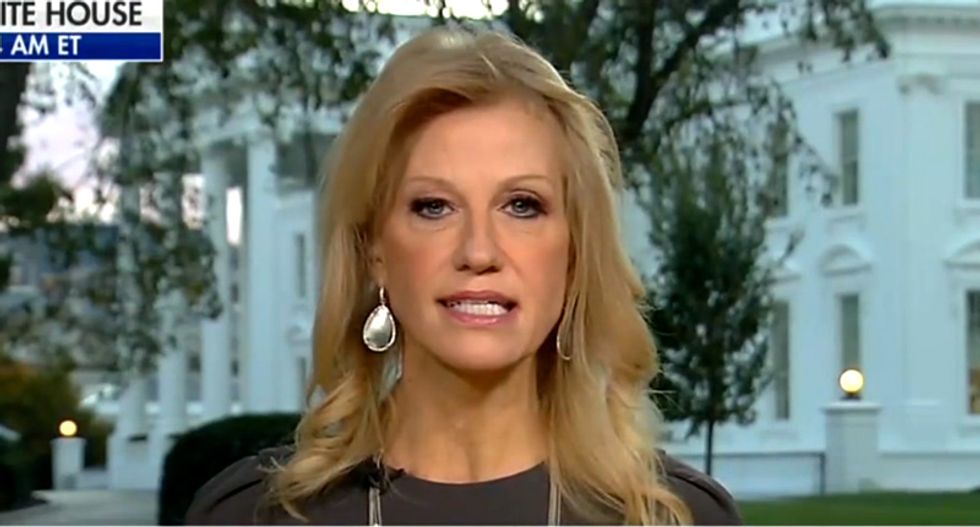 Counselor to the President Kellyanne Conway took to Fox News Monday morning to defend President Donald Trump after many across the nation have been expressing outrage over his handling of two national tragedies last week.

In response to 14 bombs being sent to a dozen of the President's top critics, including two former U.S. Presidents in a clear assassination attempt, followed by the massacre of 11 Jews praying in a synagogue – the deadliest attack on the Jewish people in American history – Conway declared that White House staffers are the real victims.

"The kind of rhetoric that is said day in and day out about this White House, the people who work here, the President, the Vice President, their families – it's got to stop," Conway demanded, after attacking the "comments that are made on other cable networks."

"You've got people constantly making comments about Nazism, Nazi Germany, somebody from CNN tweeted out a picture of concentration camps when the migrants were trying to come over the border," she accused. "That's got to stop!"

Comparisons to concentration camps are actually being made, but not because migrants are trying to come over the border, but because the Trump administration has been separating children from their families and putting them in cages and desert tent cities in 110 degree weather.

"The president is leading the country to heal," Conway also insisted, which is demonstrably false.

"Cut it out," she repeated. "And listen carefully – because everybody else is listening," she demanded.

CONWAY argues the real victims are White House staffers like her: "The kind of rhetoric that is said day in and day… https://t.co/wxylFzyOfc
— Aaron Rupar (@Aaron Rupar) 1540816593.0

The segment began with "Fox & Friends" co-host Steve Doocy pointing out that many people are blaming President Trump's hate-filled rhetoric for the bombs and for the mass shooting at Pittsburgh's Tree of Life synagogue.

Americans are also furious with how President Trump is not only not interested in but incapable of being the Consoler-in-Chief, and literally takes national tragedies and politicizes them while refusing to back down on his dangerous rhetoric.

On Saturday night, just hours after the slaughter of 11 Jews, Trump started tweeting about baseball. Some, including MSNBC's Joe Scarborough, saw his tweet as a message of support to white nationalists.

On Sunday Trump attacked Tom Steyer, who has been waging a campaign against Trump, during Americans to support impeachment. Despite – or because – Steyer was one of the targets of the 14 bombs last week, Trump singled him out and attacked him over the weekend.

Monday morning, despite two bombs being sent to CNN on Wednesday, Trump called the media "the true enemy of the people."

Conway, however, decided to claim that after every national crisis or disaster, Trump "has always called on us to unify."

That's not only disingenuous, it's false. And when he has, it's been a call to unify, meaning to support him and his policies.

Thanks to Aaron Rupar of ThinkProgress for posting the video.