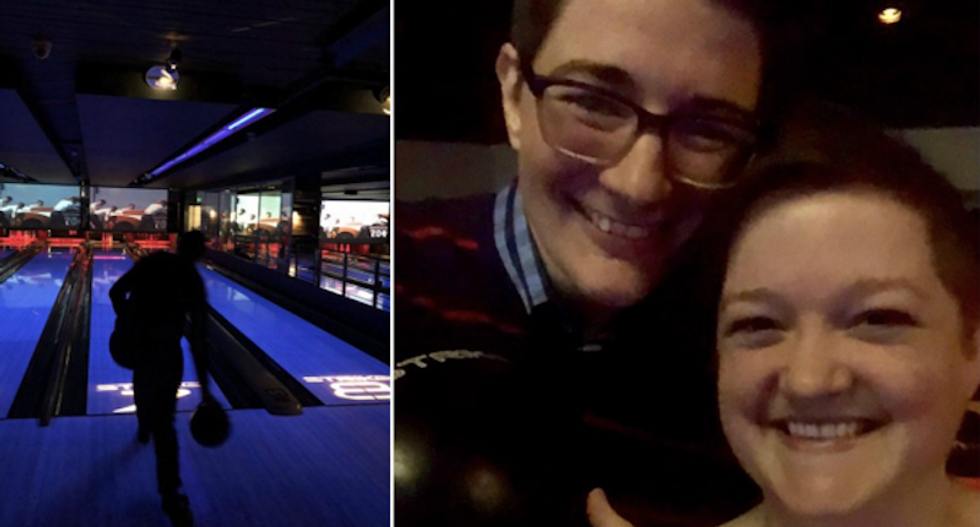 A lesbian couple on a date night were confronted by security guards at a bowling alley after one of them used the women's bathroom, reports Gay Star News.

The couple went to the Strike bowling alley in Australia. They bowled a few hours, then headed to the restrooms.

One of the women explained on Twitter that her partner is triggered by public restrooms because of how people react to her.

"It’s not a fun place for my partner because people often stare or comment on her presence and appearance. They feel entitled to police gender in bathroom environments. It’s weird and awful,’ wrote Charlie Walton on Twitter.

On her way out, she was confronted by a rude and aggressive security guard. "The guard said if she didn’t leave the premises she would be removed forcibly. He called for a second guard. My partner was so scared. Imagine two guards approaching you to throw you out for going to the toilet! I am shaking with rage as I type, @StrikeBowling,’ Walton wrote. A second guard approached. In a bid to defuse the situation, Charlie introduced herself as Charlotte.

Once they alerted the manager, they got an apology, but remained shaken by the incident.

"It shouldn’t fall on LGBTIQA staff to make LGBTIQA customers feel safe and welcome. I want someone from both companies to apologize in writing to my wife and assure her that steps are being taken to organize LGBTIQA awareness training so this doesn’t happen again," Jessica Walton wrote.