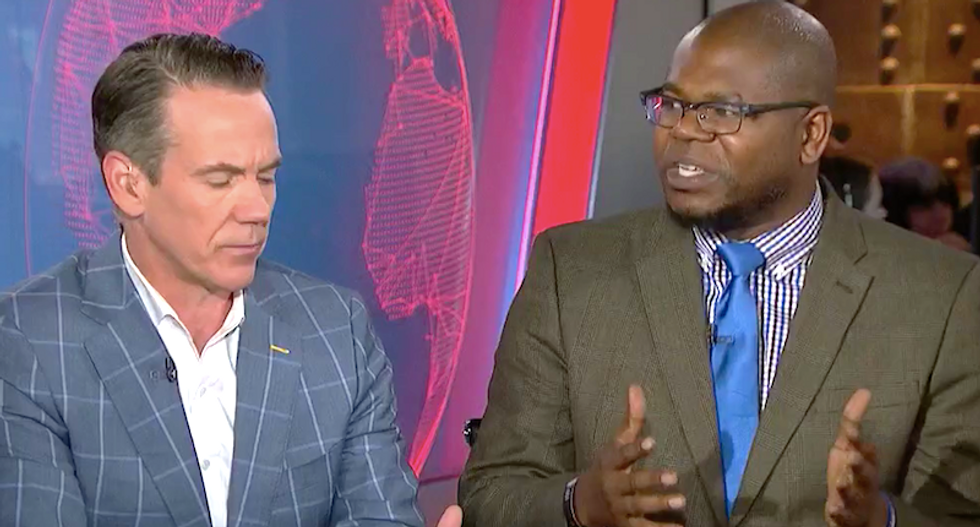 A Republican pollster insisted on MSNBC that the Russia investigation was prompted by Democratic excuses for losing the presidential election -- but another guest set him straight.

Chris Wilson, a GOP strategist and CEO of WPA Intelligence, told MSNBC's Chris Jansing that President Donald Trump recognized that Russia tried to interfere in the election, but he insisted it was unfair to fully investigate those efforts.

"Since the day after the election, this has become a process of Democrats trying to delegitimize his election, so it makes him very defensive," Wilson said. "Frankly, it makes many Republicans very defensive about the entire process. Rather than accepting the results of the election, it becomes Democrats saying, well, it's not fair because Russia got involved or it's not fair because of what Vladimir Putin did."

Jansing reminded the Republican pollster that officials put in place by Trump have confirmed Russian interference, and she asked how that was unfair for Democrats to point out and call for investigation.

"If you're saying Russia interfered, and therefore he was elected -- yes, that's delegitimizing," Wilson said. "That was part of the process of the Clinton campaign, immediately following the election, getting together to figure out, we have to explain why we lost an election we should have won."

Jason Johnson, politics editor for The Root, stepped in to correct Wilson's historically inaccurate account of the timeline for raising the alarm about Russian attacks on the election.

"Yeah, no, that's not what happened," Johnson said. "The White House literally talked to both -- they talked to Mitch McConnell and Republicans, and said, 'Hey, look, the Russians are trying to interfere.' It happened before Trump got elected."

Johnson said GOP lawmakers threatened to make the same argument as Wilson before Trump was even elected, and that gave Russia cover to continue interfering.

"Mitch McConnell and the Republicans said, 'If you talk about this publicly, we will claim you're trying to delegitimize Trump two months before the election,'" Johnson said. "That's a problem."