MSNBC panelists lay out damning evidence of collusion: 'Trump was signaling to the Russians' 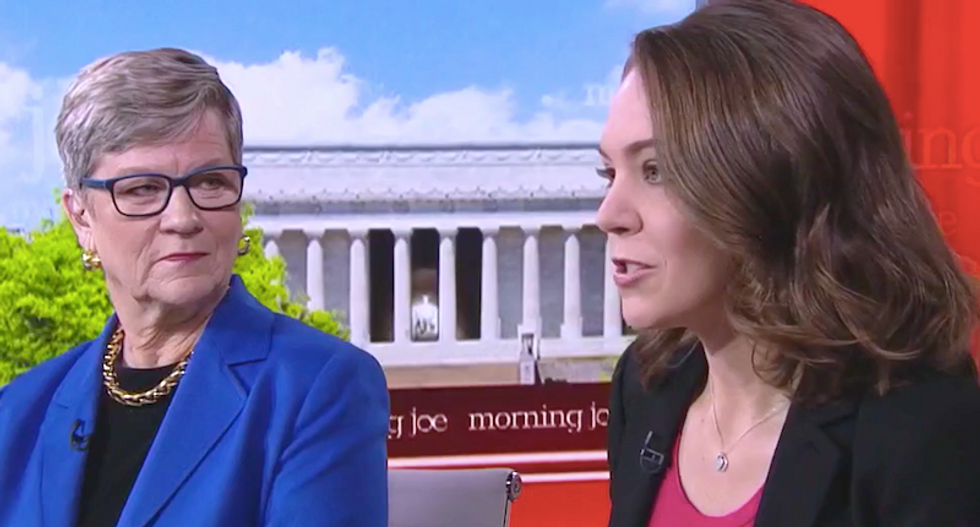 Three guests explained to MSNBC's "Morning Joe" how the most recent reporting showed abundant evidence of collusion between the Trump campaign and Russia.

Kathleen Hall Jamieson, author of the new book, “Cyberwar: How Russian Hackers and Trolls Helped Elect a President," went into the writing process skeptical of Kremlin influence on the 2016 election -- but came away convinced that foreign interference was crucial to Trump's win.

"Three ways to get there," Jamieson told MSNBC. "Trolls, those are the imposters in cyberspace, the influence of hacking on the media agenda, including hacked content used as the basis of questions that hurt Clinton in two debates, and the possible influence of Russian disinformation on James Comey's decision on Oct. 28, (2016), to basically let the public know that he would re-open the investigation. Changed the media agenda, she dropped in the polls 2.5 percent -- that could have been a decisive influence all by itself."

Jamieson said whether Trump colluded with Russia was a separate question from whether Russian influence affected the outcome of the election.

"It's important to note that when you make the argument that says that there would have been collusion because of alignment, there didn't have to be alignment between Trump and the Russians to create the alignment," Jamieson continued. "Because they had the targeting information, they could simply follow the media's tactical coverage which told them which states to go to, and they could have followed the media coverage of where Trump was going, and, as a result, aligned."

Natasha Bertrand, who has reported on Russian influence operations for Business Insider and now for The Atlantic, said the GRU military intelligence service first attempted to hack Clinton, on July 27, 2016 -- the same day Trump publicly asked them to find her missing emails.

"Coincidence?" Bertrand said. "This is exactly what Robert Mueller laid out in one of his indictments earlier this year, and it kind of seems like a random thing at the time for the president to say on national television, 'Russia, if you're listening, I hope you can find these 30,000 missing emails.'"

She said reporting and law enforcement investigations had shown the missing emails became an obsession for Trump and his aides, and they were a constant theme for Russian disinformation campaigns aimed at U.S. voters.

"This was an ongoing theme during the campaign," Bertrand said, "and the fact that we saw the GRU trying to hack into Clinton's emails on the very day that Trump said, 'Russia, if you're listening' -- it almost seemed like a signal, and intelligence experts told me at that moment Trump was signaling to the Russians it was okay for them to do that, and giving them his permission to do that."

The New Yorker's Dexter Filkins, who took a deep dive into suspicious communications between a Trump Organization computer server and Russia's Alfa Bank during the summer of 2016, said his findings should trigger a congressional or law enforcement investigation.

"Beginning in May 2016, for a four-month period before the election," Filkins said, "there's a pattern of very unusual behavior surrounding the Trump computer server when a Russian bank, the largest private bank in Russia began to try hundreds and hundreds of times to get in touch with the Trump server, DNS lookups."

He said the contacts do not appear to be accidental, and he said they show evidence of human direction -- not random computer activity.

"It's very suggestive of communication, the pattern over that four-month period," Filkins said. "It's not 100 percent clear, but I think I took the story as far as it would go. I think somebody with subpoena power is required to get to the bottom of it, but it's very unusual."