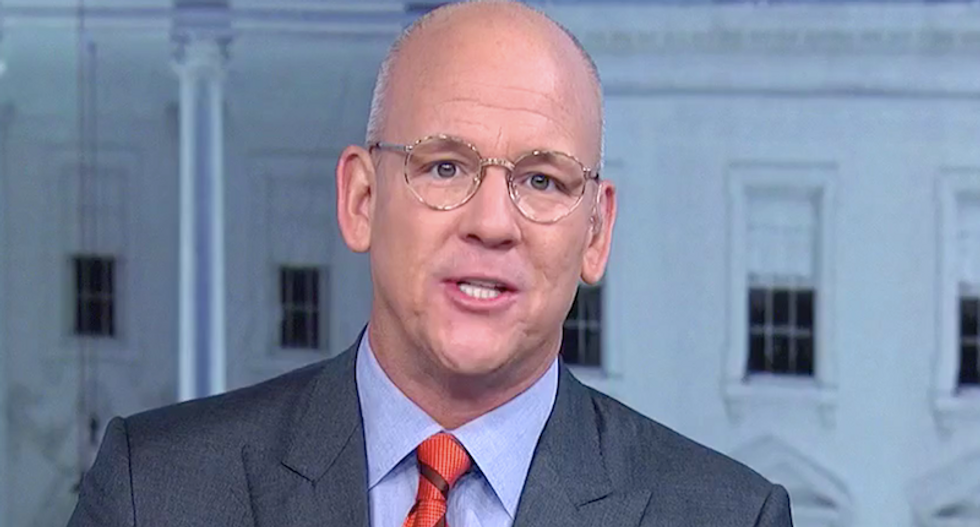 MSNBC's John Heilemann blasted President Donald Trump's moral cowardice after one of his supporters was charged in a string of mail bombs targeting his most prominent critics.

The president told reporters he would not call his election opponent or two of his predecessors after the Trump supporter allegedly mailed explosive devices to them, and the "Morning Joe" analyst said that was repugnant and shameful.

"What he said was -- and they are, I believe, the two most, kind of, landmark signal repulsive words of last week, which were, 'I'll pass,'" Heilemann said, "when the president was asked on Friday after the bomber had been -- or the alleged bomber had been arrested, whether he was planning to call Barack Obama, Michelle Obama, Bill Clinton, Hillary Clinton and the other people who had bombs sent to them, the president stood on White House grounds and said, 'I'll pass.' That's what he said about that."

He said that blithe dismissal of his presidential duties sent a profound signal.

"They were both corrupt, bankrupt institutions that were hollowed out and waiting to be taken over by Donald Trump," he said. "They have now been taken over by Donald Trump and they are in a much worse, much uglier place than they were five years ago, 10 years ago. They were in pretty ugly, much uglier place, back then and it's because of this guy that you're pointing to on Friday, that was his reaction when he was asked if he was going to be the minimally presidential, minimally human thing to reach out to people who had bombs mailed to them, leaders of the opposition party, former presidents and public servants, whether he was going to call them, he said 'I'll pass.'"

The president didn't just vacate his duties, Heilemann said -- he encouraged further attacks on the targets of those bombs.

"I don't care what you think about Tom Steyer, it's ridiculous," Heilemann said. "It's not only that he didn't call him -- I shouldn't say ridiculous -- appalling, despicable, depraved. He goes out to a rally on Friday night and participates happily, smiling in a 'lock her up' chant about Hillary Clinton, who just had a bomb sent to her in the mail."

"He got on Twitter the next day and was tweeting about Tom Steyer, who just had a bomb sent to him in the mail," Heilemann added. "It's not a question of whether it's presidential behavior or not, it's not minimally human behavior in these circumstances and the effect that it has on his followers, on his devotees, on his base is of course corrosive and dangerous."