MSNBC’s Yamiche Alcindor baffled by Kanye's 'bizarre' rant: ‘He was trafficking in stereotypes’ -- and it won’t help Trump one bit 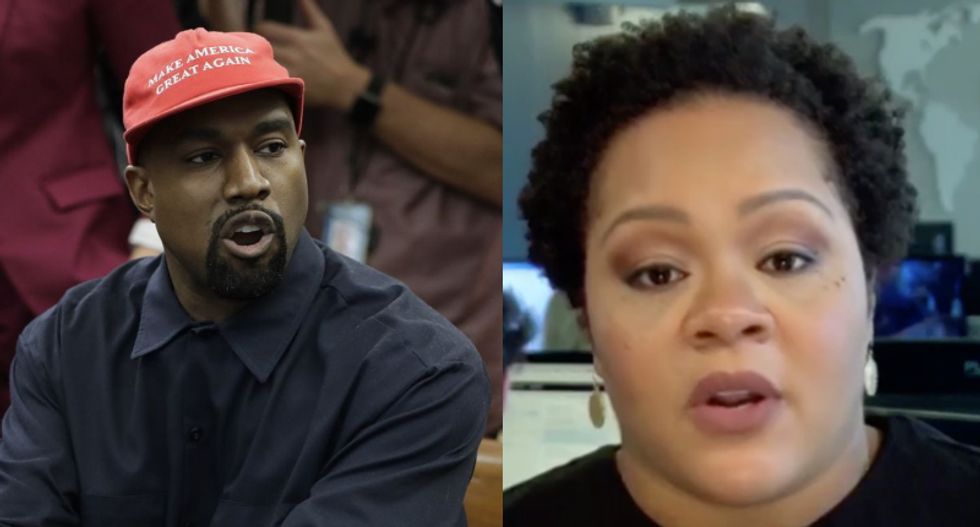 MSNBC contributor Yamiche Alcindor was stunned and appalled by the rant delivered in the Oval Office by Kanye West on Thursday -- and said the rapper's appearance with the president wouldn't help Trump one bit with African-American voters.

"It was truly a bizarre moment, and mainly because what we see was a complete transformation of Kanye West," she said. "Not only is his music something of a rallying cry for African-Americans and he's really a conscious rapper, but this is also a rapper who said 'George Bush doesn't care about black people' at the height of when people were criticizing President Trump's [sic] handling of Hurricane Katrina."

Alcindor slammed West for repeating "specific stereotypes that have been overused about African-Americans."

"He talked about the fact that black people have been using welfare, that there aren't fathers in the home. Of course we know those things are just patently false," she said. "Kanye West was really talking about all this stuff and really not making a lot of sense in front of President Trump. It was a truly bizarre, bizarre moment."

Asked by host Stephanie Ruhle how this would impact the president with black voters, Alcindor was dismissive.

"I don't think that Kanye West is going to help him at all get any more voters, votes from African-Americans," she said. "Just looking at Twitter and some of the text messages I'm getting, people were appalled that Kanye West did this."

Alcindor went on to add that black people wouldn't be fooled by the Kanye's support for Trump.

"Black people are smart enough to know just because Kanye West is an African-American man, doesn't mean you're going to follow him and follow what he's saying," she said. "You could say that again with Herman Cain," the black conservative presidential candidate whose campaign flamed out spectacularly.

"So I don't this helps the president at all with African-American voters."