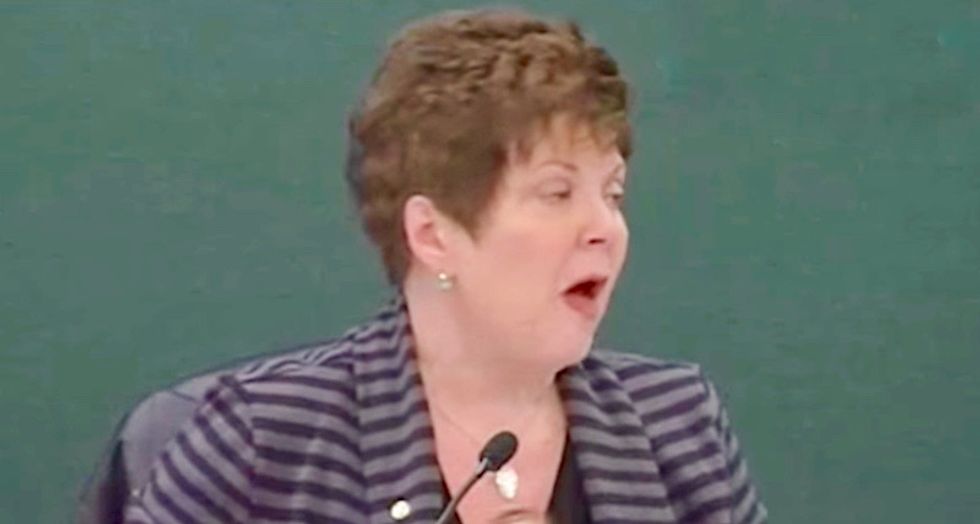 A Republican official melted down at a meeting of the Pierce County Council South in Washington state, reports the Seattle Times.

Pam Roach is a fixture of Washington politics who previously served in the statehouse where she "regularly broke Senate decorum."

She has been described as "a suburban-Mormon-granny version of Yosemite Sam: a gun-toting hothead quaking with fury" and has been accused of "brandishing guns at staffers and conniving to out closeted gay Republican colleagues."

On October 5, she turned that fury on her son at the Pierce County Council budget retreat where they were discussing a mental-health crises center.

Roach was angry about a detail of the budget and told a fellow Republican that she was "gonna put you..." before her son gaveled her down.

Roach then became angry at her son, telling him "F*ck you, I’m leaving!"

She then sent an email to the local newspaper defending her actions: "I got very passionate during a political discussion with my fellow councilmembers, including my son Dan. In the heat of the moment I used harsh words that I regret. It was a mistake. I love my son dearly but sometimes we have political disagreements... It seems I’ve been listening to too many Democrat protesters lately."

Here's a taste of Roach's conduct from another meeting in which she feuded with another council member and threatened to turn off his microphone.