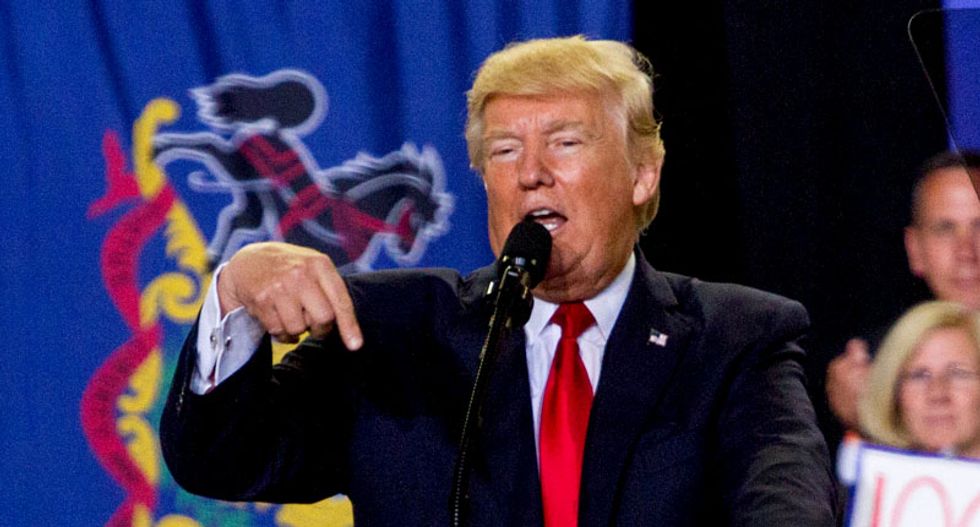 After President Donald Trump fired off a hysterical tweet this weekend warning of mass "voter fraud"—a right-wing bogeyman for which there is virtually zero evidence—and threatening violators with severe punishment, the Lawyers' Committee for Civil Rights Under Law condemned the president for deploying Jim Crow-era scare tactics to suppress minority voter turnout just two weeks before the midterm elections.

"President Trump's statement regarding vote fraud is one of the most naked attempts to promote voter suppression that we have seen in modern time,"  Kristen Clarke, president and executive director of the Lawyers' Committee, said in a statement following Trump's tweet, in which he declared that "all levels of government and law enforcement are watching carefully" for violations.

Clarke argued that the president's tweet is clearly part of an ongoing right-wing effortto "promote fear and incite law enforcement to action in ways that could chill voter participation this midterm election cycle."

"Meanwhile this administration and the Justice Department's silence regarding widespread voter suppression has been deafening. To date, this Justice Department has failed to file a single case to enforce the Voting Rights Act and has failed to take any action to protect the rights of minority voters," Clarke said. "Instead, we see the president using his platform to promote unsubstantiated and false claims about vote fraud."

"What is most dangerous about the president's statement is the suggestion that government and law enforcement across the country are activating to prosecute voters," Clarke concluded. "This is nothing more than an open and brazen attempt to use the threat of criminal prosecution to intimidate minority voters, an old and familiar tactic that dates back to the Jim Crow era."

Sen. Bernie Sanders (I-Vt.), who is currently on a get-out-the-vote tour spanning nine states, wrote on Twitter that Trump and the GOP "know that they have to lie about voter fraud" in order to win elections.

"Don't let them get away with it!" Sanders wrote.

Donald Trump and Republicans know that they have to lie about voter fraud—which is virtually nonexistent—to suppres… https://t.co/YYFrosTP3b
— Bernie Sanders (@Bernie Sanders) 1540138454.0

Trump's fearmongering tweet comes as the GOP is waging an aggressive war on voting rights throughout the U.S. ahead of the crucial Nov. 6 midterms.

As Common Dreams reported, Georgia's Republican Secretary of State and gubernatorial candidate Brian Kemp—who Trump has enthusiastically endorsed—has purged hundreds of thousands of voters from the rolls in the weeks leading up to next month's election.

"It's clear they're going to try to steal the midterms to whatever extent they can," writer David Klion argued in a tweet on Sunday. "If it works I'm not sure what can legally be done about it. SCOTUS killed the Voting Rights Act five years ago, pre-Gorsuch, pre-Kav[anaugh]."