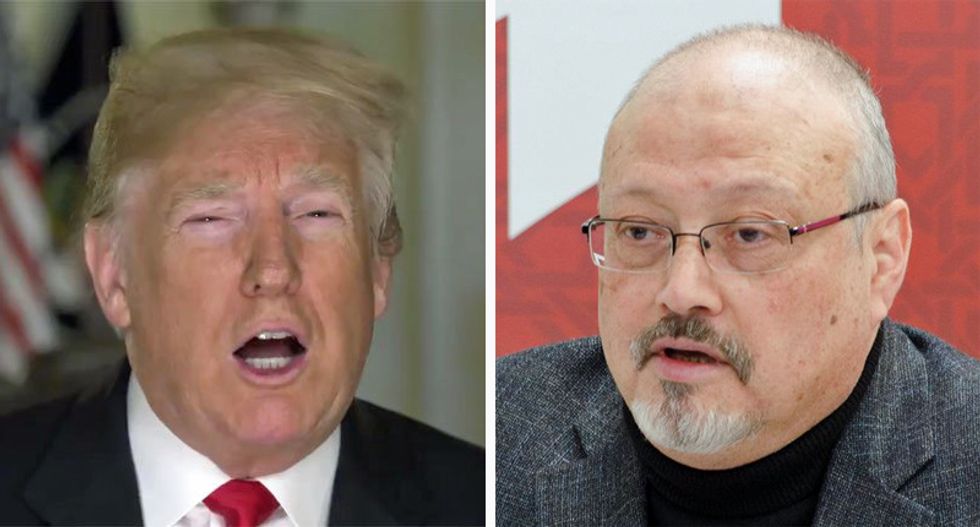 The famous Watergate era question -- 'what did the president known and when did he know it?' -- is once again a central inquiry in a presidential scandal, according to a panel on MSNBC's "The Last Word with Lawrence O'Donnell."

The Thursday evening discussion focused on the latest developments in the disappearance of Washington Post columnist Jamal Khashoggi, suspected of being murdered and dismembered with a bone saw inside Saudi Arabia's consulate in Turkey.

MSNBC intelligence analyst Malcolm Nance revealed how quickly President Donald Trump would have been alerted if the reporting on U.S. intelligence's knowledge of the plot is true.

"The chain of information that we've seen reported from The Post about the U.S. intelligence knowing -- having information about the Saudi's participation in this or issuing orders on this -- we have a system setup so that the President of the United States is informed of [important developments] like that within five minutes," Nance explained.

"Which means the president would have had to have known about the outlines of this plot and the murder almost instantaneously," he said.

"What do you think of the available avenues for you to be pursuing on this story as its developing?" O'Donnell asked Shane Harris, an intelligence and national security reporter for The Washington Post.

"Well, I think there's a big question still here about -- to use the old phrase -- 'What did the president know and when did he know it?' Our previous reporting in the paper this week showed that there were intercepts they had of Saudi officials discussing separate efforts to lure Jamal Khashoggi back to Saudi Arabia, where he would be detained," Harris replied.

"So if there was information about potential threats to Jamal Khashoggi before he ever went into that consulate, the question then becomes, 'Who knew about that in the government?'" he said. "And was that ever presented to president?"

"As Malcolm said, there are mechanism to elevate intelligence from the bottom up to the president when people feel he needs to know it, and those are questions we would like to try to answer," he concluded.

'Frankenstein's Monster': The Supreme Court's next big case can set the stage for more Trump chaos

According to legal analyst Shan Wu, the Supreme Court will hear oral arguments on Wednesday that could lead to a ruling that would create chaos for decades and throw future elections into turmoil on a state-by-state basis.

At issue is Moore v. Harper, which could set the stage for the implementation of the “Independent State Legislature Theory” that would have a wide-ranging impact on federal elections by allowing state legislatures to manipulate voting districts even more than they are doing so now.