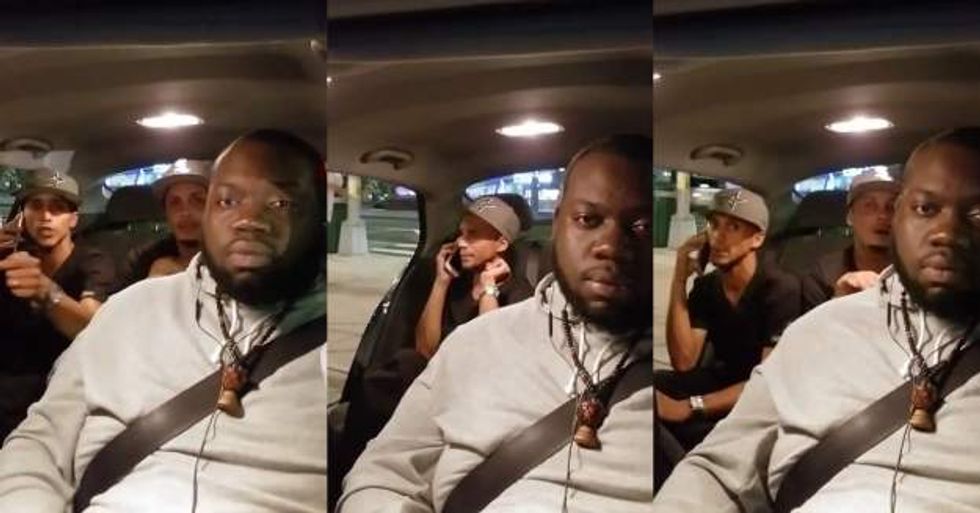 Passenger Robert Ortiz (background) calls Lyft and police on driver Shaun Pepas Lettman (foreground) for not allowing him to play his music. Images via screengrab.

In a now-viral recorded confrontation, a gay Trump supporter called the police on a black Lyft driver for not allowing him to play his music during the ride.

Instinct Magazine reported that Robert Ortiz and some friends were picked up by Shaun Pepas Lettman after leaving a gay bar in New York. Ortiz asked Lettman if he could play some music over the car's stereo system and when the driver said no, the passenger began an argument with him.

Lettman began recording after pulling over due to the argument with Ortiz — and captured the passenger not only calling the police on him, but also calling him a racial slur.

At one point during the 16-minute-long video, Ortiz called Lyft and told a representative that "your driver is racist against gay people" and later said he "called the police to protect myself because I know my legal rights as an American citizen that voted for Trump."

After hanging up with the representative, the passenger called his friend — and used a racial slur twice to refer to Lettman.

Though the gay New Yorker's complaint was about not being allowed to turn on his music, he suggested to the police that he was afraid Lettman would do something that "threatens my life."

After posting the video of the lengthy altercation to YouTube, Lettman revealed in a GoFundMe page that Lyft suspended his driver account for two days to investigate the incident — causing him to lose two days' worth of wages.

"After the end of the video, I had to also call the police for myself expressing my concerns and fear of what will happen if I was not assisted," the driver wrote. "Luckily there was no physical confrontation but the company I drive with felt it necessary to cancel my account pending investigation.  Unfortunately, expenses weren’t suspended and I am left to dig myself out of an awfully stressful predicament."

The "Insulted but Not Broken" fundraiser earned Lettman over $21,000 at press time, and Instinct revealed that Ortiz had been fired from his job at a CityMD urgent care center.

You can watch Lettman's video of the altercation below: